A pair of Venture Global subsidiaries is seeking federal approval to start the pre-filing process for a fourth liquefied natural gas (LNG) export terminal and associated pipeline along the Gulf Coast. 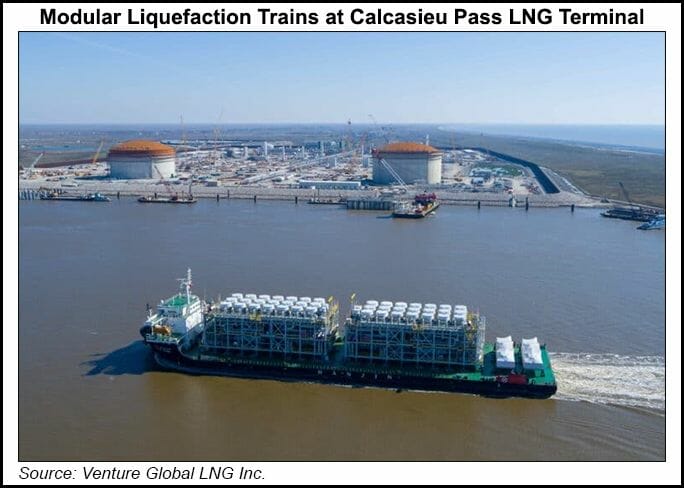 Once completed, the facility would have a nameplate capacity of 20 million metric tons/year (mmty) and would be sited next to Venture’s Calcasieu Pass terminal in Louisiana now under construction. A planned natural gas pipeline to be constructed from Jasper County, TX, to the newly proposed facility also was included in the filing.

The CP2 LNG project, with a peak capacity of 24 mmty, would include 18 liquefaction blocks, each with a nameplate capacity of about 1.1 mmty. It would also have four LNG full-containment storage tanks, two marine loading berths for ocean-going vessels and an onsite 1,440 MW power generation facility, according to the Federal Energy Regulatory Commission filing.

The project would be built in two phases, the FERC filing stated, with each phase to have 10 mmty of nameplate capacity. Phase 1 is to include nine trains, two tanks, a 720 MW power plant, two marine berths and ancillary facilities. The CP Express pipeline and 84,000 hp of compression at a single station also would be constructed in the first phase.

The construction and operational timelines for the second phase would depend on market conditions.

With approvals, CP2 LNG could begin construction in 2Q2023. It then would commission and initiate operation of the LNG blocks sequentially. First gas deliveries are expected in 2Q2025, with full commercial operations of the first phase targeted for mid-2026.

CP2 LNG intends to own the natural gas and the LNG that passes through the project before it is sold to third parties. It also plans to act as an agent for third parties under long-term offtake agreements.Venture has multiple gas export projects in the works. The developer has contracted with KBR Inc. to lead construction on the first phase of the Plaquemines LNG facility. However, it pushed back a final investment decision to the middle of 2021. Polish state-owned natural gas company Polskie Górnictwo Naftowe i Gazownictwo SA, aka PGNiG, and Électricité de France SA have signed binding 20-year agreements to take 3.5 mmty from the Plaquemines terminal. Venture also has proposed the 20 mmty Delta LNG facility, which would be sited in Louisiana next to Plaquemines.