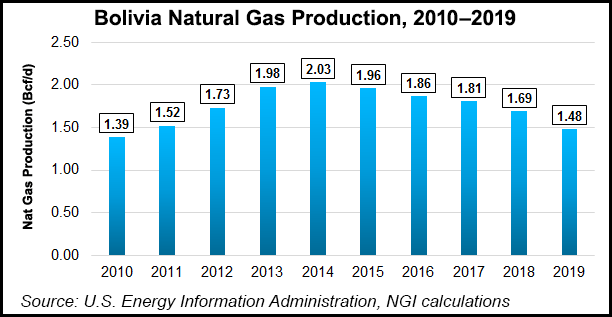 “Here in Argentina we have natural gas for another 200 years, and gas is the energy that the world has decided will be the transition fuel to renewable energies,” President Alberto Fernández said during an official ceremony from Neuquén province. He was flanked by company CEOs and local politicians.

Fernández said the new pipeline would give the country “energy peace of mind.”

Argentine state firm Integración Energética Argentina (Ieasa) is in charge of the project. Ieasa head Agustín Gerez reportedly said the project would be tendered in mid-May with construction to begin in September. In-service is targeted for 2023.

Vaca Muerta is one of the biggest shale resources in the world, but development has been slowed by financing, infrastructure and regulatory challenges. Despite the resource, this upcoming Southern Cone winter Argentina faces a widening gas deficit and will need to import liquefied natural gas (LNG) and additional volumes from Bolivia.

“We need to distribute gas throughout all of Argentina” and “take gas to every corner,” said the president.

The $3.4 billion pipeline will be carried out in two stages. The $1.5 billion, 24 million cubic meters/day (Mm3/d) first stage is to run from Tratayen in Neuquén to Salliqueló in Buenos Aires province. It would be key in allowing more natural gas from the Vaca Muerta shale formation to reach demand centers. A second stage would redirect gas to the north to replace Bolivian imports.

Energy minister Darío Martinez called the pipeline “the most important gas transport project in 40 years.” The infrastructure would also allow for seasonal exports of natural gas to regional neighbors Chile, Uruguay and Brazil, he said.

“Bolivia unfortunately has stopped being the supplier of excellence in Latin America and is in the midst of a steady production decline,” he said. Ríos previously served as Bolivia’s hydrocarbons minister.

He said that in 2032, Bolivia would need to import natural gas to meet demand and Argentina should be the country to replace it.

He said Vaca Muerta gas is “highly competitive” with breakevens of $2.30-3.50/MMBtu. “Along with the United States, Argentina is the only country that can ramp up its shale resources quickly.” He referred to the global gas crunch brought on by Russia’s invasion of Ukraine.

Still, he added, Vaca Muerta has been slow to develop over the past decade, and the window of opportunity is “in the next three or four years.”

He said Argentina is going to spend $4.5 billion on LNG imports this May-September period. “With this level of investment it could send out gas to the region.”

Victoria Sabbioni, commercial director of gas and power at Argentine producer Compañía General de Combustibles SA, said that Argentina’s fulfillment of four straight years of summer gas export commitments to Chile is a sign of Argentina’s ability to be an exporter.

“We’ve just scratched the surface of Argentina’s gas potential,” she said. “Chileans are very appreciative that we’ve met four years of our summer commitments and it hasn’t been easy but we’ve done it.”

She said the next step would be to provide natural gas to Chile year-round. Argentina resumed gas exports to Chile in 2018 after an 11-year hiatus brought on by Argentina’s economic crisis. There are seven cross-border pipelines in place.

Pablo Albertio, director of regional business at energy trading firm Cinergia said that Argentina could think bigger and send natural gas out to global markets through LNG export terminals. For now, however, the focus is on supplying industry and the residential segment for the upcoming winter.

Argentina will receive 14 Mm3/d of gas from Bolivia from May to September, the same volume of imports as last winter. Ríos said Bolivia could probably supply 8-9 Mm3/d, leaving the rest to LNG imports in an increasingly tight market.

In a tweet, economist Julían Rojo said that there needed to be “caution” around Vaca Muerta. He said producers still depended on subsidies, and a private sector company had yet to express interest in the pipeline project.