Portions of the Susquehanna River Valley aquifer in an area of New York that overlies the Marcellus and Utica shales are among the most favorable for potential large-scale groundwater supply, according to a U.S. Geological Survey (USGS) study. 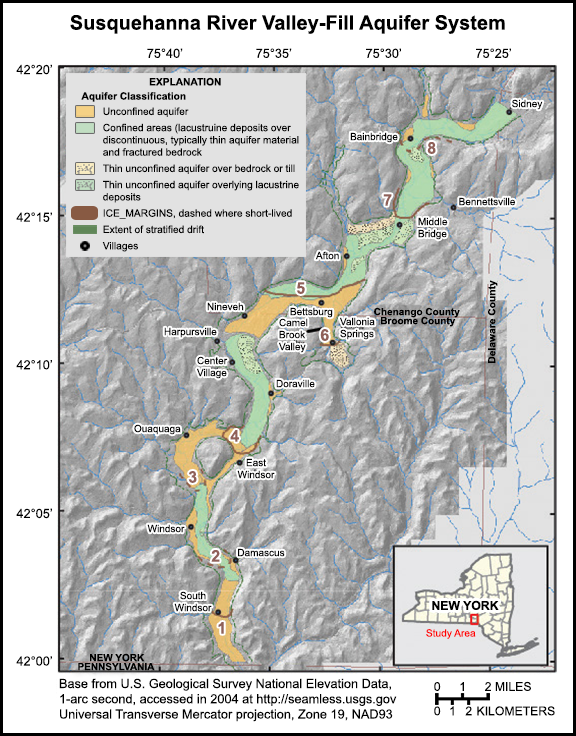 The aquifers that have the highest potential to support large-scale municipal or industrial operations, but are most susceptible to pollution from land use, are “unconfined’ aquifers having thick layers of coarse-grained sediments that readily receive recharge, found mostly in three reaches in Broome County, NY, according to the USGS report: from the Pennsylvania border to one mile north of South Windsor, NY; a valley section that rounds the west side of the bedrock hill north of Windsor, NY; and the valley from Nineveh, NY, to east of Bettsburg, NY.

Other aquifers in the region include valley “confined” aquifers, which are surrounded by rock or sediments that are a barrier to direct recharge from rainfall; thin unconfined aquifers that are recharged but have little capacity to store groundwater; and the fractured bedrock aquifer that is widespread, but only adequate to supply household wells, USGS said.

USGS evaluated the hydrology of a 32-mile reach of the Susquehanna River valley and adjacent areas in New York’s eastern Broome and southeastern Chenango counties.

Water use in the study area “is primarily through domestic wells, most of which are completed in fractured bedrock in upland areas. A few villages in the Susquehanna River valley have supply wells that draw water from beneath alluvial fans and near the Susquehanna River, which is a large potential source of water from induced infiltration.”

Lawmakers in the state’s legislature have introduced two bills this year calling for a two-year moratorium on HVHF. New York Gov. Andrew Cuomo has said he doesn’t think the bills will pass (see Shale Daily, March 13).

Last June, Cuomo administration officials hinted that HVHF could first be allowed in Broome and four other counties along the Pennsylvania border, provided that the Department of Environmental Conservation (DEC) grants regulatory approval (see Shale Daily, June 14, 2012). Local governments across the state have been choosing sides in the fracking debate (see Shale Daily, June 6, 2012; June 4, 2012; May 22, 2012). In July 2008, then-Gov. David Paterson ordered the DEC to complete a supplemental generic environmental impact statement (SGEIS), which effectively placed a moratorium on the drilling of horizontal wells. Paterson requested the SGEIS because the original impact statement was completed in 1992, before technological changes in unconventional development.