By 2025 natural gas is expected to overtake coal as the second most used fuel worldwide and North America will have transitioned to become a net energy exporter, while by 2040 global energy demand will have increased by almost 35% from 2010 levels, according to ExxonMobil Corp.’s Outlook for Energy: A View to 2040, which wasreleased Tuesday. 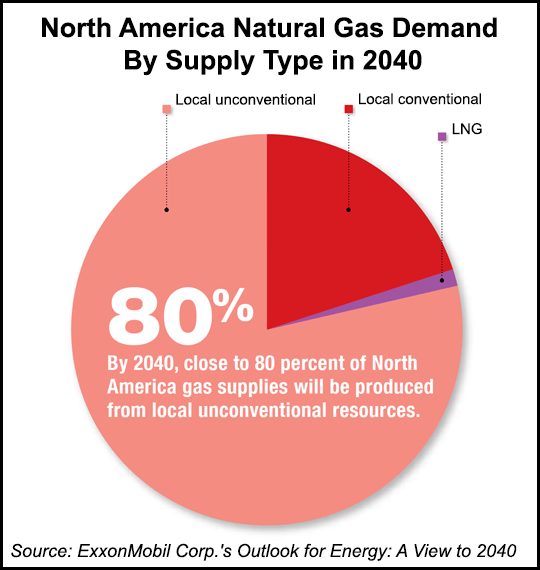 Coming a week after the Energy Information Administration released its Annual Energy Outlook for 2013 (AEO2013), which also projects through 2040, ExxonMobil’s study envisions the global energy landscape evolving significantly as regional demand and supply patterns shift in the coming decades, creating new opportunities for international trade and economic growth. Much like the EIA report, ExxonMobil sees a future that is heavily reliant on unconventional resources, i.e., shales, for future energy needs, noting that it expects that by 2040, close to 80% of North America’s gas supplies will be produced from local unconventional resources.

According to the EIA outlook, because of rising shale gas development, the United States will become a net exporter of liquefied natural gas (LNG) starting in 2016, and a net exporter of gas (including via pipelines) in 2020 (see Shale Daily, Dec. 7).

While the company’s annual forecast projects that global energy demand in 2040 will be about 35% higher than in 2010, its forecasters believe that future energy needs will be supported by more efficient energy-saving practices and technologies, increased use of less-carbon-intensive fuels such as natural gas, nuclear and renewables, and the development of unconventional energy sources that were previously inaccessible without technology advances.

Oil is expected to continue to be the most widely used fuel, but natural gas is “the fastest growing major fuel” and will overtake coal by 2025 as the second most used fuel, according to the annual report. In last year’s annual report ExxonMobil had predicted that gas wouldn’t overtake coal for 30 years (see Shale Daily, Dec. 9, 2011). Tillerson said a year ago LNG was expected to replace coal as the second largest global energy source by 2040.

According to the latest outlook, demand for natural gas is forecast to increase by almost two-thirds, or 65%, through 2040, with 20% of global production occurring in North America, supported by growing supplies of gas from shale and other unconventional sources.

The producer said new technologies will continue to be key to development of reliable and affordable energy. Over the next two decades, more than half of the growth in unconventional natural gas supply will be in North America, which is why ExxonMobil foresees North America likely transitioning into a net energy exporter by 2025, creating new opportunities for global trade with countries in Europe and the Asia Pacific region, which are reliant on international markets to meet domestic energy requirements. North America production growth will provide “a strong foundation for increased economic growth across the United States, and most notably in industries such as energy, chemicals, steel and manufacturing,” ExxonMobil said in the study.

Other findings this year include: