Emphasizing the United States’ commitment to energy diversity across Europe, President Trump on Tuesday said a “tremendous” amount of liquefied natural gas (LNG) would be exported to Poland at “a really good price.” 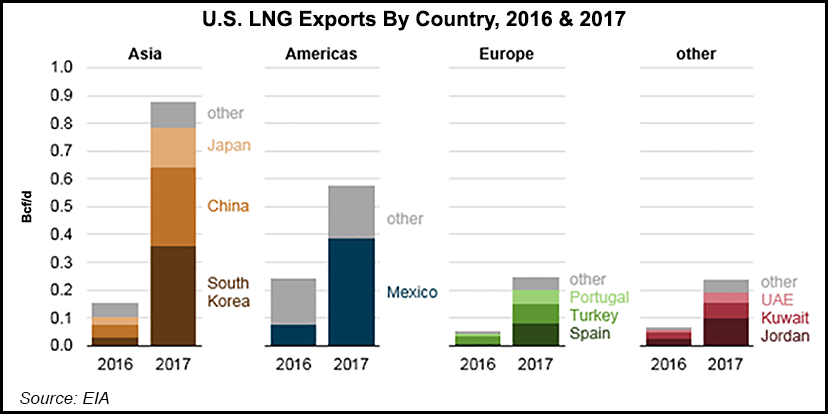 Speaking at a joint press conference with Polish President Andrzej Duda at the White House, Trump said he and Duda are exploring opportunities to advance energy security. “No nation should be dependent upon a single foreign supplier of energy,” he said, referring to Russian-owned Gazprom’s Nord Stream 2 natural gas pipeline from Russia to Germany.

Several Eastern European countries, including Poland, are opposed to the pipeline, and Poland’s state-owned oil and gas company, PGNiG, signed a five-year contract for LNG sourced from Cheniere Energy Inc.’s Sabine Pass terminal in Louisiana. In June, PGNiG also agreed to take more gas exports over 20 years in two separate proposed projects that would be sited in Louisiana and Texas.

“Poland has worked tirelessly to increase energy independence nationally and across central Europe,” Trump said, citing the ongoing construction of a natural gas pipeline from Norway to Poland as well as a new LNG import facility that began operations this summer.

The United States sent its first LNG export to Poland in June 2017 via Cheniere’s Sabine Pass LNG terminal in Louisiana, a milestone for Poland and Europe in their push for energy security.

Meanwhile, a bill introduced in the U.S. Senate in July would give North Atlantic Treaty Organization (NATO) member countries “an escape from Russia’s political coercion and manipulation,” in part by speeding approvals of U.S. natural gas exports.

In addition to requiring the Secretary of Energy to speed up approvals of LNG exports to NATO allies and other countries, the Energy Security Cooperation with Allied Partners in Europe Act (ESCAPE Act) would authorize mandatory U.S. sanctions on the development of Russian energy pipelines, direct U.S. representatives at NATO to work to achieve energy security for allies in Europe and Eurasia, and call for a comprehensive strategy to increase U.S. energy exports “to these countries that are being held hostage by Russia,” Sen. John Barrasso (R-WY) said.

U.S. LNG exports reached 1.94 Bcf/d in 2017, an increase from just 0.5 Bcf/d in 2016, with more than half shipping to Mexico, South Korea and China. Europe, however, accounted for the third-largest share of U.S. LNG exports, according to the Energy Information Administration.