Americans pulled back on distillate fuel, gasoline and jet fuel consumption last week as spread of the Omicron variant of the coronavirus accelerated, data from the U.S. Energy Information Administration (EIA) showed. 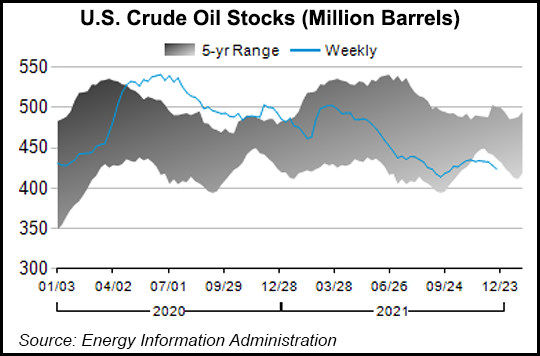 “Much uncertainty remains regarding the impact of the Omicron variant on mobility, demand and oil prices,” analysts at ClearView Energy Partners LLC said.

Countries across Europe and Asia are mulling new economic restrictions. In the United States, however, city and state governments are largely resisting lockdowns, hoping to navigate the Omicron wave with continued vaccination efforts, testing and, in some cases, renewed mask mandates.

President Biden on Tuesday called on Americans to get vaccinated and boosted. He said his administration would buy 500 million at-home rapid tests that would be available to Americans for free beginning in January. According to the U.S. Centers for Disease Control and Prevention (CDC), nearly 40% of the country remains unvaccinated.

Omicron is thought to be highly contagious. It has surpassed the Delta variant as the leading cause of infection. Nearly three-fourths of new cases last week were caused by Omicron, the CDC said.

Raymond James Inc. chief economist Scott Brown said the new variant would inevitably create enough trepidation to cause travel and economic interruptions, affecting energy demand. However, because a majority of Americans are vaccinated, he does not expect government imposed lockdowns that would cause lasting impacts.

Omicron “is likely to be a near-term constraint on growth, but a temporary one, as we saw with the Delta variant,” Brown said.

IEA forecast global crude demand would grow by 5.4 million b/d this year, a downward revision of 100,000 b/d from the agency’s November report because of the new variant. However, the global energy watchdog also noted that widespread inoculation efforts were expected to minimize Omicron’s long-term impacts. It said crude oil consumption would grow another 3.3 million b/d next year, reaching pre-pandemic levels of 99.5 million b/d.

The Saudi-led Organization of the Petroleum Exporting Countries (OPEC) and its Russia-led allies known as OPEC-plus recently said they would boost production by 400,000 b/d in January to help align supply with demand, continuing a pace of monthly supply increases the cartel began in August.

OPEC-plus is scheduled to meet next on Jan. 4 to decide whether to continue production increases in February and beyond.

“Our models indicate that if OPEC-plus maintains its January 2022 production levels” through next year, global oil supply and demand “could be nearly balanced for the year,” the ClearView team said.