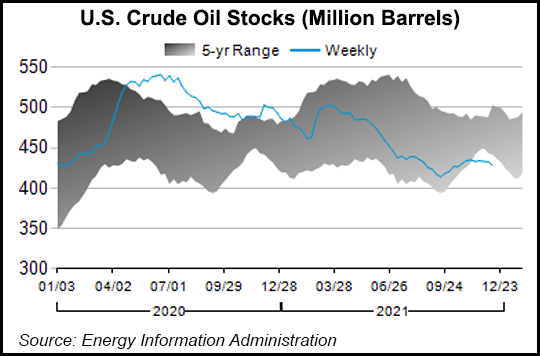 At the same time, imports fell. Oil imports averaged 6.5 million b/d last week, down 28,000 b/d from the prior period.

The overall demand figure represented a record level in EIA data that dates to 1990, analysts at ClearView Energy Partners LLC said in a note to clients Wednesday.

The Omicron variant of the coronavirus sparked concerns about surging cases and new travel restrictions that could dampen oil consumption. But recent public health data from South Africa – where Omicron first spread widely before arriving in the United States – indicated that, while highly contagious, illness caused by the new variant is less severe than its predecessors. The latest EIA data suggest Americans are carrying on with their daily routines against the Omicron backdrop, driving demand for fuels derived from oil.

Raymond James Inc. analyst John Freeman called the EIA report “bullish” on the demand front. But he did note that Omicron has been reported in 77 countries since November “and continues to spread rapidly throughout the U.S. and the world,” presenting a wildcard for future WSPR results.

Earlier this week, the International Energy Agency (IEA) downgraded its global demand outlook because of Omicron. It emphasized, however, an expectation the variant’s impact would prove short lived.

The strong demand led to storage withdrawals. U.S. commercial crude inventories for the Dec. 10 period, excluding those in the Strategic Petroleum Reserve, decreased by 4.6 million bbl week/week. At 428.3 million bbl, stockpiles are about 7% below the five-year average.