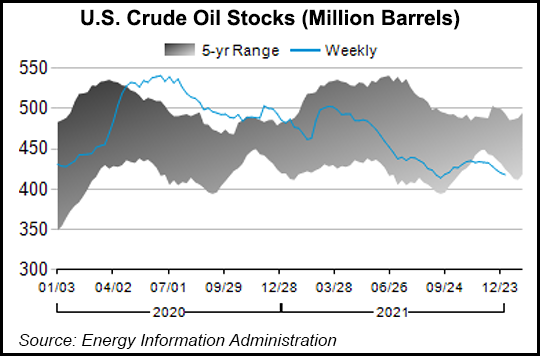 Demand climbed 5% week/week and reached 21.9 million b/d for the period ended Jan. 14. The overall gain was driven by a 4% increase in gasoline consumption and a 22% spike in distillate fuels, which include diesel, according to EIA’s latest Weekly Petroleum Status Report.

The result marked a continuation of the steady rise in demand over the course of 2021 and into this year.

He referred to the latest variant of the coronavirus, which has spread rapidly across the United States and the globe. However, the Omicron strain to date has generally caused fewer serious health complications and deaths.

As a result, governments around the world have resisted the sweeping lockdown measures put in place in 2020 – when the pandemic began – that crushed oil demand that year. President Biden confirmed during a press conference Wednesday that the United States had no major national lockdown plans.

The rising demand mirrors the global picture and helps explain why Brent crude futures, the international benchmark, approached $90/bbl this week, a level not seen since 2014, Matousek said.

The International Energy Agency (IEA) said Wednesday global oil demand climbed by 1.1 million b/d to 99 million b/d last month. The Paris-based agency expects growth in the first quarter but at a modestly lower pace than in December, due to modest impact from Omicron.

However, it raised its global demand estimates from an earlier forecast by 200,000 b/d for 2021 and 2022 to growth of 5.5 million b/d and 3.3 million b/d, respectively.The Organization of the Petroleum Exporting Countries (OPEC) on Tuesday said in its monthly outlook that it expects strong crude consumption growth in 2022, despite Omicron. OPEC researchers predicted global demand would rise by 4.15 million b/d and that consumption would exceed 100 million b/d in the third quarter, returning demand to pre-pandemic levels.