U.S. crude oil inventories, excluding those in the Strategic Petroleum Reserve, decreased by 1.0 million bbl during the week ending Oct. 16 to 488.1 million bbl. However, inventories were still 10% above the five-year average for this time of year, according to a federal report. 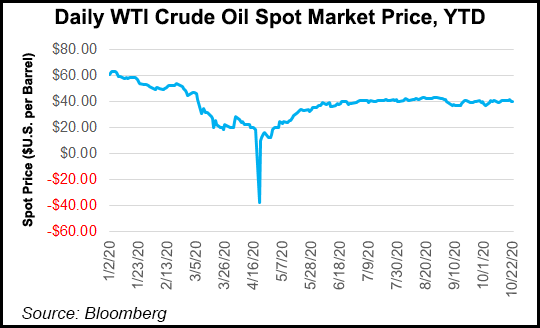 The weekly decline reflected continued light production amid an uneven demand recovery as the coronavirus pandemic continues to affect travel and, by extension, demand for fuels derived from oil.

The Energy Information Administration’s (EIA) Weekly Petroleum Status Report (WPSR) showed that domestic crude production averaged 9.9 million b/d during the covered week, down 600,000 b/d from the previous week’s total. It marked only the second time this year that production dipped below 10.0 million b/d.

Crude production was 3.2 million b/d below the 2020 peak reached during the week ending March 13, shortly before coronavirus outbreaks infiltrated the Lower 48, and 2.7 million b/d below year-ago levels, according to EIA data.

Production dropped by a total of 1.1 million b/d over the first two full weeks of October. Demand, however, remains choppy.

After climbing the previous week, demand dropped in the latest covered week, EIA said. Demand fell 7% week/week and 14% from a year earlier. Among the key drivers: Demand for jet fuel plunged more than 50% and gasoline consumption declined 14%.

The demand drops marked a reversal from the two prior weeks and curbed the beginnings of an upward trend. EIA said for the week ending Oct. 9 demand increased 6% week/week — following a 5% jump the prior week — resulting in a 17 million bbl decrease to total U.S. inventories of crude and refined products. That marked the largest decline since the week ending Feb. 22, 2019.

Domestic consumption of gasoline and jet fuel, however, are vulnerable to ongoing virus outbreaks, as the latest WPSR showed. That could renew downward pressure on oil prices, analysts said.

“We are concerned about heightened impact on demand from more widespread lockdowns this winter” in response to the pandemic, Raymond James & Associates Inc. analysts said.

The United States on Wednesday reported more than 60,000 new coronavirus cases for the second consecutive day, according to data compiled by Johns Hopkins University, as the virus spread quickened in a majority of states. Total U.S. cases now top 8.3 million.

Against that backdrop, analysts at Clearview Energy Partners LLC said economic activity could suffer in late 2020 and hinder fuel demand. Another round of government stimulus, namely, $1,200 direct payments to households, could prop up spending and support demand, particularly for gasoline, the analysts said.

Still, such legislation hangs in limbo and may not get addressed with urgency until after the November election. Absent assistance, new economic malaise could settle in and dampen more Americans’ abilities to spend on a range of products, including gasoline, Raymond James chief economist Scott Brown said.

“Without further support, we are likely to see an increase in foreclosures and evictions,” Brown said. “Temporary layoffs are more likely to become permanent and softness in the overall economy may lead firms to trim payrolls to reduce costs.”