Breakeven costs for all unsanctioned oil projects have fallen to around $50/bbl on average, down around 10% over the last two years and 35% since 2014. 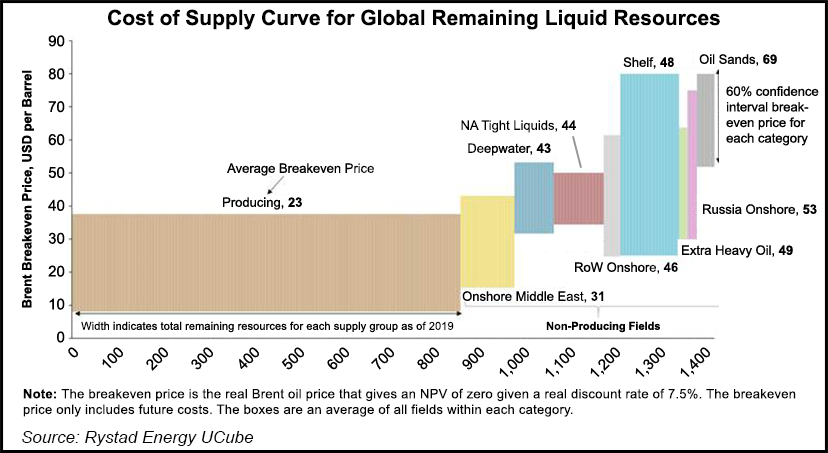 With oil production less expensive to produce versus six years ago, the “clear cost savings winner” is offshore deepwater development, according to Rystad Energy’s latest assessment.

Rystad’s cost of supply curve for liquids issued on Wednesday said the required oil price for producing 100 million b/d in 2025 has been in continuous decline, which means the updated projection of $50 could keep production at this level.

Another key trend is that the cost of supply curve moved to the right from 2014 to 2018, analysts noted.

Upstream Research head Espen Erlingsen said declining breakeven prices imply that “the upstream industry over the last two years has become more competitive than ever and is able to supply more volumes at a lower price.

“However, the average breakeven prices for most of the sources remain higher than the current oil price. This is a clear indication that for upstream investments to rebound, oil prices must recover from their current values.”

For breakeven prices and potential liquids supply in 2025, data showed that the main sources of new production from 2014 to 2018 were tight oil, and the Organization of the Petroleum Exporting Countries “came out on top.”

In 2014, the Rystad team estimated the average breakeven price for tight oil was $82, with potential supply in 2025 at 12 million b/d.

“This drop is due to the sharp reduction in tight oil production during the first half of this year. The lower activity this year, and a potentially slow recovery next year, will remove tight oil supply from the market.”

A key reason for the improved costs in upstream developments is the lower unit price across the industry, Rystad noted. Following the 2015 oil price collapse, oilfield service companies needed to reduce the prices they charged exploration and production companies to remain competitive.

“For all sources, unit prices dropped close to 25% between 2014 and 2016 but it was tight oil that faced the largest reduction,” said analysts. “Since then, the supply segments have recovered differently. While offshore and conventional onshore supply only saw marginal price increases, tight oil unit prices increased considerably during 2018.”

Given that tight oil activity declined in 2019, and then the industry was slammed by Covid-19 earlier this year, “tight oil unit prices have started to drop again since 2018. For all the main upstream segments, current unit prices have come down around 30% compared to 2014 levels.”

Outer Continental Shelf (OCS) and deepwater projects between 2014 and 2018 showed a cost reduction of around 30%, Rystad data indicated.

“However, the lack of new sanctioning during the same period reduced the offshore potential liquids supply for 2025,” analysts said. “Since 2018, breakeven prices have been falling for offshore, with deepwater down 16% and shallow water down 10%.”

The cost decline put average breakeven prices for deepwater “just below those of tight oil. At the same time, the potential 2025 supply from offshore developments has not changed too much. This makes offshore a winner out of all the supply sources over the last two years when it comes to cost improvements and supply potential.”

Meanwhile, onshore oil projects in the Middle East were found to be the least expensive source of new production with an average breakeven of around $30/bbl. Deepwater was the second least expensive with an average of $43. Russian onshore supply is still one of the more expensive resources because of the high gross taxes in the country, according to Rystad. And the OCS remained the segment with the largest resource potential with 131 billion bbl of unsanctioned volumes.