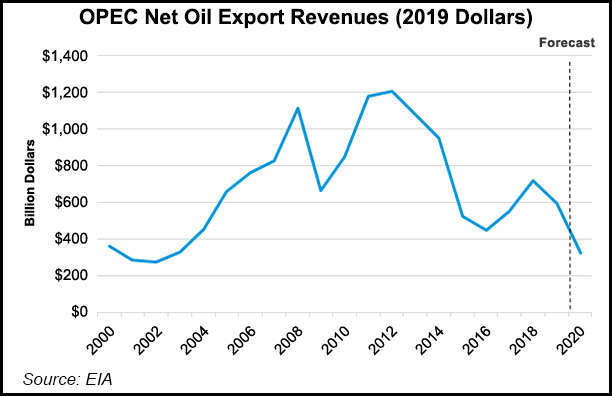 EIA said for the week ending Oct. 23 demand increased 8% week/week, recovering from a decline the previous week and extending a run of choppy results as fuel needs bounced around amid the uneven recovery from the demand shock imposed by the coronavirus.

Demand was 9% below the same week a year earlier, with jet fuel and gasoline needs still well off their pre-pandemic levels.

U.S. crude production remains volatile, as well. It increased 1.2 million b/d week/week after dropping by a similar level over the prior two weeks, EIA said.

For the latest covered week, excluding the Strategic Petroleum Reserve, total petroleum stocks fell by 3.9 million bbl week/week. Stocks still remain about 10% above year-earlier levels. Commercial crude, gasoline and distillate stocks all are up for the year.

At 492.4 million bbl, EIA said, U.S. crude inventories are about 9% above the five-year average for this time of year.

The American economy, meanwhile, rebounded in the third quarter, with gross domestic product (GDP) advancing at a seasonally adjusted annualized rate of 33.1%, according to the U.S. Commerce Department. However, while a record print, it was not enough to recoup all of the losses caused by the pandemic in the first and second quarters. GDP is still expected to finish 2020 under the year before.

Roughly half of the more than 20 million U.S. jobs lost to the pandemic have not yet come back, Department of Labor data show, and virus outbreaks could disrupt momentum in the current quarter.

Against that backdrop, oil prices remain low relative to year-earlier levels on lower global demand for petroleum products because of the pandemic and mitigation efforts. With cases mounting this fall across much of the United States and overseas, demand could face intensifying headwinds and prices could come under new pressure, observers say.

“There are many instances of governments, especially in Europe, re-imposing lockdowns as Covid metrics noticeably worsen heading into the winter,” Raymond James & Associates Inc. analysts said.

France and Germany, for example, this week announced new restrictions in the face of ballooning cases and deaths.

In a separate report, EIA said it expects that members of the Organization of the Petroleum Exporting Countries (OPEC) will earn about $323 billion net in export revenues in 2020 — the lowest level in 18 years — driven by lower export volumes from weak prices.

OPEC and allied nations agreed to steep production declines earlier this year in response to the pandemic. Oil export revenues were already on the decline for OPEC, as alternatives, including renewable fuels, gradually gained share.

“The decrease in revenues could be detrimental to member countries’ fiscal budgets, which rely heavily on oil sales to import goods, fund social programs, and support public services,” the agency said.

“A flood of crude oil is hitting the scene when the market least needs it,” he said, noting that “the virus threatens to kill demand” once again.