The oil market may begin to recover next month, but U.S. midstream companies still face a “challenging” environment as cash flow, low pipeline utilization and other factors may stall a return to financial health, according to Wood Mackenzie. 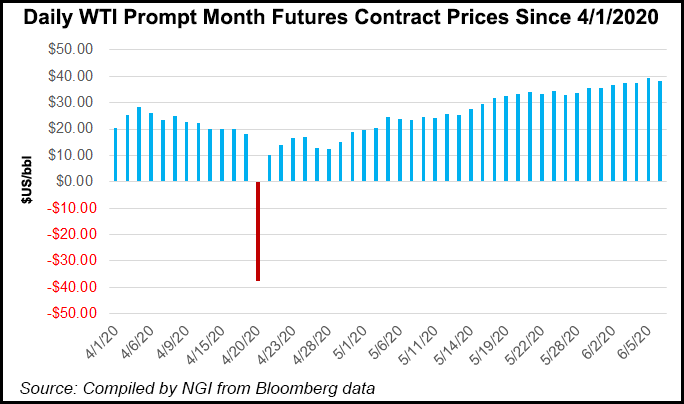 The consultancy recently indicated that even though June is widely expected to be when oil production bottoms out, “very little new drilling makes sense at $35/bbl.” In fact, on a basin-wide average, Wood Mackenzie sees the Permian Basin as the only region that can make money at that price level.

As a result of the exploration and production (E&P) response to the macro environment, oil production is expected to decline by 1.4 million b/d from March to June, according to Wood Mackenzie, with around 1 million b/d from shut-in production. Some of production is projected to come back online in July, with a return to normal levels by August. However, whether June is the production low depends on the price.

“On the whole, companies face more difficult circumstances than they did in 2016, at the depth of the last price cycle,” said Wood Mackenzie analyst Robert Polk. “While low prices play a role in this, price isn’t the whole story. Other factors also have an impact: credit ratings, near-term debt maturities, liquidity.”

On its first quarter earnings call, Targa Resources Corp. management said it was continuously monitoring and measuring credit exposure, though no “material” credit losses were expected. Executives noted that Targa, which cut its 2020 growth capital spending to $700-800 million and reduced its dividend, had about $2.4 billion of available liquidity at the end of March, with no maturities of senior notes or credit facilities occurring until 2023.

DCP Midstream LP also reduced its dividend and lobbed off around 70% of its sustaining and growth capital in order to boost liquidity, with management telling investors that it could pull additional cash flow levers if market conditions continued to deteriorate.

With $30 oil not enough to incentivize a return of activity in most Lower 48 plays, liquidity, cash-on-hand, cash flow generation and available credit take on more significance, Polk said. The analyst noted that there are fewer options currently available to E&Ps, particularly if the price environment remains depressed for a prolonged period of time.

“One of the things we’ve seen over the first quarter of this year, which doesn’t include the full brunt of the demand destruction brought about by the Covid-19 pandemic, is that total liquidity has deteriorated significantly for a lot of Lower 48 companies,” Polk said.

Several E&Ps already have sought bankruptcy protection in an attempt to emerge from the downturn on stronger footing, with more expected. Denver-based Whiting Petroleum Corp. has filed for Chapter 11 protection, along with Englewood, CO-based Ultra Petroleum Corp. and Anadarko Basin independent Templar Energy LLC. Altogether, 19 North American E&Ps have have filed for bankruptcy protection since the start of the year, according to law firm Haynes and Boone LLP.

Wood Mackenzie expects oil demand to recover progressively in the coming months as coronavirus-inspired lockdowns ease, with Brent crude forecast to reach $40 through the fourth quarter. That would be enough to lift some shut-ins back above short-run marginal cost, and reopening wells could push Lower 48 production back up to 9.3 million b/d during the third quarter, it said.

However, a sustained price recovery is necessary to spur drilling, making the situation for midstream companies all the more difficult.

“Midstream infrastructure projects, many of which were financed with high levels of debt, will struggle to deliver projected returns,” Polk said. “Cash flow is falling in tandem with utilization, limiting the ability of the midstream to increase or even maintain distribution.”

Kinder Morgan Inc. (KMI) opted to preserve flexibility and balance sheet capacity when it increased the dividend by 5%/year to $1.05/share, rather than the $1.25/share annual target. The company “remains committed” to increasing the dividend to $1.25 assuming a return to normal economic activity, and management hopes to make that determination when the board meets in January to determine the dividend for the fourth quarter.

However, as oil prices improve, E&Ps are likely to place greater emphasis on cash flow generation as opposed to production growth, according to Wood Mackenzie. This may mean lower pipeline utilization for midstreamers even as some production comes back online.

The Permian, long the Lower 48’s oil growth engine, drove a massive pipeline expansion over the last several years. “As a result, pipeline capacity from the basin was overbuilt even before the price downturn,” Polk said.

Wood Mackenzie sees utilization in the Permian falling to about 60% by October, which is further and faster than in the Bakken Shale, or in Wyoming or Colorado. In addition, the lower utilization rates could remain at around that level until at least December 2021, the firm said. In contrast, Colorado and Wyoming midstream infrastructure utilization rates show a V-shaped recovery, returning to normal levels by early 2021. Bakken should stabilize at about 80% utilization by October, analysts said.

Even before Covid-19 hit the United States, KMI management had noted the lighter appetite for building more gas pipeline capacity in the Permian. The midstreamer brought online the 2 Bcf/d Gulf Coast Express project in September, and its Permian Highway pipeline has an in-service target of 2021. A trio of other midstream companies is building the Whistler Pipeline to move Permian gas, also expected to enter service in 2021.

However, KMI was considering a fourth pipeline, Permian Pass if sanctioned, but commercial talks have slowed considerably and the project is not part of the backlog. Meanwhile, management also took a defensive tone when it came to its transport agreements, noting that the majority of volumes flowing on KMI’s transportation pipes are under take-or-pay contracts. However, the company did expect to see a reduction in volumes flowing on its Permian and Bakken assets.

Wood Mackenzie’s Beeker, like most energy analysts, said many E&Ps are electing to defer drilling and completion activity, in violation of their minimum volume commitment contracts with midstream companies. “They’d rather pay a few million dollars in penalties than drill at current prices…It’s not a good environment. The components of the broader industry are intermingled and intertwined, so the relative success or failure or financial health of one has an impact on others. Midstream is by no means immune.”

However, the analyst team at Alerian said it could have been worse. Midstream companies dodged a bullet when the Railroad Commission of Texas voted against enacting statewide production cuts, and the Oklahoma Corporation Commission took no action after hearing arguments for mandated curtailments.

“In addition to potentially shutting in production in an inefficient manner, mandated cuts may have allowed struggling producers to avoid minimum volume commitments and the related deficiency payments to their midstream counterparties,” the Alerian team said.