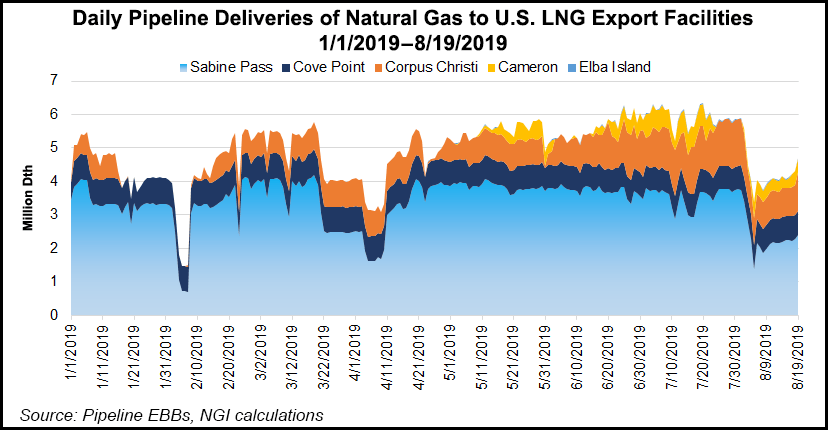 The 6.0 Bcf/d in LNG feed gas deliveries accounted for 7% of total U.S. dry natural gas production during the period, EIA said, citing data from OPIS PointLogic Energy. The rapid rise in demand from U.S. export terminals has made LNG the fastest-growing source of consumption for U.S. natural gas through the first seven months of 2019, according to the agency.

Exports via U.S. LNG export facilities and via pipeline to Mexico grew to a combined 10.9 Bcf/d in July, with a year-to-date average through July of 10.0 Bcf/d, up 30% versus the same period in 2018.

“The United States has been exporting more natural gas than it imports on an annual basis since 2017, and EIA expects that U.S. natural gas exports will continue to increase as new LNG facilities come online,” the agency said.

EIA estimates show U.S. LNG exports hitting record highs this summer, totaling 4.8 Bcf/d in June and 5.2 Bcf/d in July. Based on the 6.0 Bcf/d of feedstock deliveries in July and 5.5 Bcf/d of deliveries in June, the export figures imply around 15% of feed gas sent to LNG facilities went to fueling the liquefaction process.

The United States has been a key contributor to a recent wave of global LNG capacity growth that saw 35 million metric tons per year (mmty) of capacity added in 2018, according to the International Gas Union.

Kinder Morgan Inc.’s Elba Island LNG facility near Savannah, GA, and the Freeport LNG terminal on Quintana Island on the Texas coast are also closing in on commercial start-up this year.

The Elba Island facility had previously been slated for a May start-up but encountered mechanical issues. Freeport recently said it now expects to ship its first cargo later this month, slightly delayed from its previous target for mid-August.

One of those developers, Venture Global LNG Inc., said Monday it has closed on the project financing for its proposed Calcasieu Pass LNG facility and the related TransCameron pipeline to be located in Cameron Parish, LA.

The 10 mmty Calcasieu Pass terminal began full site construction in February and is scheduled for commercial operations in 2022.

“Our goal has always been to lower the cost of electricity by delivering clean, low-cost LNG to the world,” Venture Global co-CEOs Mike Sabel and Bob Pender said. “The closing of our financing is the culmination of years of hard work, and we want to sincerely thank our Venture Global team, our construction partners, our foundation customers, our lenders and advisors, Cameron Parish and our local partners in Louisiana.”

Along with securing all necessary permits, including FERC authorization and world-wide export approval from the Department of Energy, the Calcasieu Pass project also has 20-year LNG sale and purchase agreements with Shell, BP, Edison S.p.A., Galp, Repsol and PGNiG.