The U.S. exploration sector delivered its fourth straight quarter of outperformance in 3Q2021, setting the sector up for what should be solid growth in 2022, according to energy prognosticators. 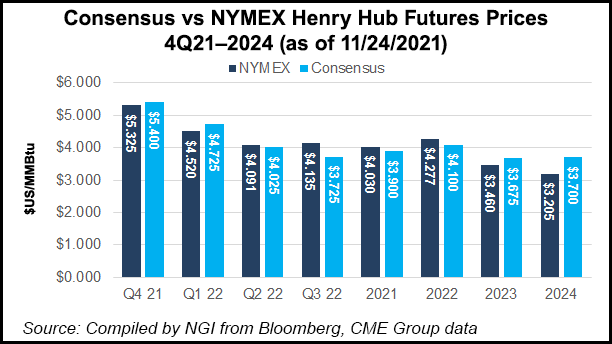 Mercer Capital analysts said the “overarching narrative” for the 3Q2021 results “was an oil and gas industry reaching a relatively steady operational state, with efficiencies offsetting cost inflation and helping lead to growth in free cash flow, despite the tumultuous past 18 to 24 months.

“These factors allowed most E&P operators to deleverage, and in some cases, also resume or increase their return of capital (either via dividends or share buybacks) to shareholders.”

The near-term outlook for natural gas prices and the 2022 strip looks positive as more rigs are raised and production expands in gassy plays. Natural gas rig additions in key combination plays, like the Anadarko Basin and the gassier part of the Eagle Ford Shale, began sending output higher late in the third quarter.

The supply impact from the additional gas rigs “is three to six months away,” which would solidify Wells Fargo’s $5.00/Mcf base case assumption for prices from October through March, Kumar noted. The monthly gas contracts for the 2022 strip mostly are above $4.00, likely a bit ambitious in light of the pending supply additions.

“We believe these prices are baking in a robust winter demand season, without considering the potential bear case scenario or even the timing of the base case scenario.”

Meanwhile, the 2020-2021 winter didn’t “arrive in earnest” until February, according to the Wells Fargo team. When it “arrives” for the upcoming winter season could determine how much gas storage is available. If the coldest temperatures don’t arrive until February, “the likelihood of leaving demand season with below-average inventories is greatly reduced, in our view,” Kumar said.

“Further, developments in Europe to address natural gas shortages have driven prices to retreat from recent abnormal highs.” Gas prices remain elevated, but the threat of “extreme shortages” that might push Henry Hub to $10 is lower than some analysts initially had forecast.

Based on this year’s performance, domestic E&Ps have lots of room to run. However, don’t expect producers to ramp up at the expense of the bottom line, analysts said.

Still, upstream capital discipline by E&Ps could limit activity in the near term, “until better visibility emerges on market fundamentals.”

The sector may take a wait-and-see attitude to determine how the market reacts as more oil flows into the market.

According to the White House, President Biden on Tuesday (Nov. 23) approved releasing 50 million bbl of oil from the nation’s Strategic Petroleum Reserve (SPR) in an effort to reduce prices at the pump.

Additional oil supply is expected to also come from other nations’ SPRs, as well as by the Organization of the Petroleum Exporting Countries and its allies as they work to control the market.

Given how close it is to the end of the year, “clients are fearful of adding to exposure in the very short term in the event of some policy announcement,” said Tudor, Pickering, Holt & Co. analyst Matt Portillo. That policy announcement includes the SPR release, which is expected to cause “a short-term stock reaction.”

There could be a “call on U.S. supply growth” to ramp up more oil over the longer term, said Horwitz. However, “E&P business models have structurally changed, with a much greater focus on cash returns and per-share metrics rather than absolute growth.”

Balance sheets are “significantly fortified, cash on hand is swelling and industry is moving toward multi-decade low leverage metrics.”

Given the continued focus on shareholder returns, E&P “reinvestment rates sit at all-time lows,” Freeman said. Year-to-date, the average public E&P reinvestment rate, below 40%, “represents nearly half of 2020’s average, which at the time was the lowest reinvestment rate in the past few decades.

“Big picture, E&Ps are not only ‘talking the talk’ regarding capital discipline, but again in 2021, are definitively ‘walking the walk.’”

The “best FCF in decades” is “underpinning a wave of new cash return commitments to shareholders,” said analyst Devin McDermott. “It’s been a record year for E&Ps, with more room to run…

“We see this shift in capital allocation away from growth toward FCF as structural, a dynamic that should support a re-rating in currently discounted valuations and higher medium-term oil and gas prices.”

Wells Fargo’s Kumar said investors had a “muted reaction” overall to the solid third quarter results, but the long-term case is improving. Until 2022 capex plans are detailed, the sector “may be in a bit of a holding pattern…” Investors also are “trying to separate political rhetoric around energy transition with the current realities of a global energy shortage and inflation to assess the long-term investment case for the group.”

Wells Fargo pegged FCF in the U.S. E&P sector reached an aggregate $8.7 billion in 3Q2021, which would be 34% higher sequentially.

What About Supply Chain Delays?

Of immediate concern may be the rising impact of inflation, which may disproportionately impact smaller E&Ps.

“While most E&P management teams have long been anticipating inflation for 2022, it feels as if 3Q2021 was a turning point as commodity prices accelerated year-to-date gains (and not just oil and gas), and the inflation discussion has begun to hit Main Street with significant delays in the supply chain across different goods and services,” said Kumar.

“Key cost inputs such as diesel, steel and labor continue to accelerate alongside the revenue generating commodities, and what was once a 5-10% inflation expectation (to be minimized via continued efficiency gains) is now pointing to 15% on the high end for some operators.”

An early look at 2022 costs suggest oilfield services (OFS) inflation “is likely to be 10-15%…though companies are trying to lock in costs now and pull additional efficiency levers to help offset a portion of this,” Horwitz said.

Evercore ISI analyst James West, who covers the OFS sector, saw a “clear takeaway” from the quarterly calls. Most OFS lines “are experiencing rising utilization, driven by greater demand and tightening supply. Many of the companies have redeployed equipment they maintained during the downturn.”

Expect to see “extended lead times and supply chain friction” into 2022, which could “delay any orders placed in the immediate future,” West said. The U.S. land market is tightening heading into 2022, which is likely to “drive an increase in net pricing.”

The Evercore team has heard anecdotes from operators “struggling to find a spread or a preferred crew, shock over the new price sheet, and shopping a bid around just to go back to their original contractor at a higher price when they could not find another option for the work.” E&Ps are also engaging with OFS companies “earlier than usual to plan for 2022 activity.”

According to TPH analysts, the inflation rhetoric has been turned up by the Biden administration.

“While we and investors know higher crude prices have been driven by better industry capital discipline demanded by the investment community after staring into the abyss of negative crude prices last year and a strong recovery in crude demand globally, it seems to be an easy policy choice to blame the oil and gas companies for some of the current price inflation,” Portillo said.

“Ultimately, short of implementing some sort of disaster policy to block crude exports, we think the most likely outcome is market concerns easing in the coming months, as crude fundamentals remain in solid shape heading into 2022.”

That theme would support TPH’s $70-75/bbl West Texas Intermediate price estimate into 2022. “In previous cycles, upstream companies given capital allocation decisions to the drillbit would have to wait for investors to return to support equity prices, but with programs in place, we think our coverage is well positioned to take advantage of any near-term weakness.”

The outlook for additional merger and acquisition (M&A) activity is positive, analysts said. Deals have been trending upward for several months, many tied to expanding natural gas portfolios in the Haynesville Shale.

In addition, larger E&Ps are “continuing to monetize noncore, longer dated pieces of their portfolios with the acquirers mostly smaller (comparatively) operators looking to add operating scale and/or inventory depth in order to maintain or increase relevance with an investor base in search of cost reductions,” according to Wells Fargo’s Kumar.

The Raymond James team noted that it was “all gas, no brakes” for E&P tie ups in 3Q2021. The M&A market “really heated up” in the last half of the third quarter, with around $16 billion in assets in its coverage exchange hands, Freeman said.

“These massive deals steal headlines, but what we can take away from this is a notable shift in the market,” Freeman said. “Companies increasingly talk about ‘ground-game’ type deals becoming more difficult to close on due to outsized expectations of sellers and steep competition in this environment for smaller deals.

“Consequently, larger deals, where less competition exists, is the preferred choice in this market. There are…fewer and fewer players in the large scale M&A game, and it wouldn’t surprise us if deals like these kept popping over the next few quarters.”

On Monday (Nov. 22), publicly held Goodrich Petroleum Corp., a long-time independent based in Houston, agreed to be taken private by Paloma Partners VI Holdings LLC in a deal valued at roughly $480 million.

‘Front Of Mind’ For ESG, Sustainability

Look for sustainability programs, along with environmental social and governance (ESG) initiatives, to “remain front of mind,” according to the Wells Fargo team. E&P operators now have an “established reporting season,” as 3Q2021 was “the third or fourth iteration…for some operators.”

As one of many recent examples, Chesapeake Energy Corp., 80% weighted to natural gas, piloted RSG programs earlier this year in the Haynesville and Marcellus shales. Now it has set a goal to have 100% of its Lower 48 dry gas production certified as RSG by mid-2022. The Oklahoma City-based independent plans to invest more than $30 million in ESG-related and emissions-reducing programs by the end of 2022.

The industry also is continuing “to look at incremental carbon capture opportunities among the energy transition landscape, given the skill set overlap with traditional oil and gas development,” said the U.S. Capital Advisors team.

Many producers are collaborating with the OFS sector to advance their low-carbon efforts. Baker Hughes Co., for example, is advancing a slew of joint ventures to expand its energy transition opportunities.