Available reserve-based lending (RBL) capital for exploration and production (E&P) companies is likely to shrink by 10-20% in the fall redetermination season, according to the latest biannual survey conducted by Haynes and Boone LLP. 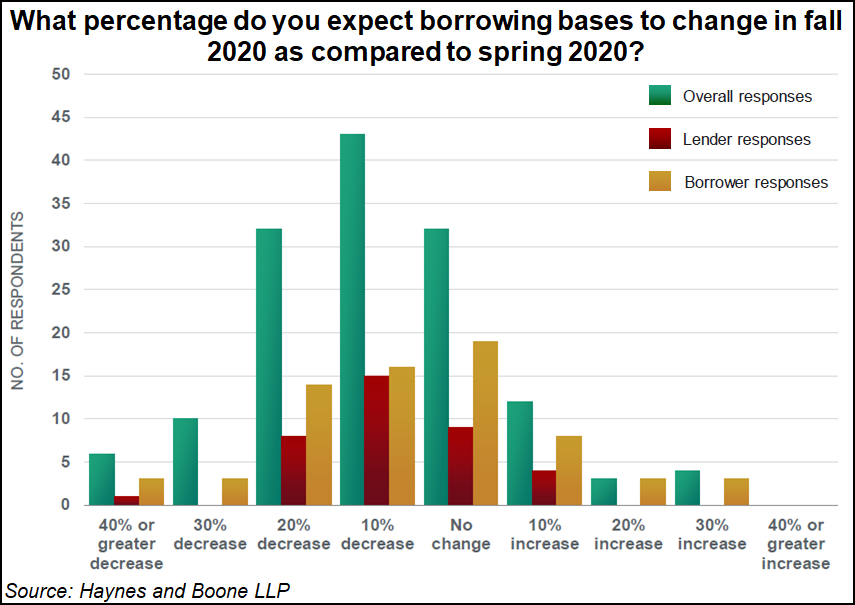 The law firm conducts surveys ahead of the spring and fall redetermination seasons for RBL, a common type of financing for North American onshore producers. The twice-yearly redetermination process protects lenders from commodity price fluctuations.

Results showed a slight improvement in sentiment from the spring 2020 survey, which saw most respondents predicting a borrowing base decline of at least 20%, researchers said.

However, “most producers have limited availability under their borrowing bases and are not in a position to absorb even a minimal decrease.”

A convergence of factors has made the outlook for natural gas prices far more bullish than that of oil, which could factor into redetermination, according to NGI’s Patrick Rau, director of strategy and research.

“It will be interesting to see whether the banks treat natural gas-heavy producers any differently, given the recent rise in U.S. natural gas prices, and the potential for even higher prices if we have a cold winter,” Rau said. “Unfortunately, the redeterminations will happen in large part before winter even starts, so banks may not be willing to adjust their price decks all that much until the next round of redeterminations this spring.”

In any case, “if banks feel oil prices will remain lower for longer, that can only help the gassier companies, because it should mean less associated gas production, everything else being equal.

“For oil companies that have significant near-term debt coming due and/or a high short-term fixed cost structure, lower borrowing bases could create some serious problems.”

The survey also found that exploration and production (E&P) companies generally are well hedged, though “most of this increased hedging was likely locked in during recent months when the market was not providing attractive prices for producers.”

“Though there are third parties interested in making new investments in the E&P space, they consist of a limited number of higher-cost sources of capital looking to provide new money to a small pool of better-positioned producers,” researchers said.

“Despite the current stress on the reserve-based loan structure, a substantial percentage of respondents expect it to survive in some form. However, the RBL of the next few years will look much different than the RBL producers previously knew. It will have tighter terms and provide less capital.”The Haynes and Boone survey follows the latest quarterly energy survey by the Federal Reserve Bank of Kansas City, aka the Kansas City Fed, in which a majority of respondents said oil prices and demand are unlikely to return to pre-Covid levels until 2022 or 2023.