The borrowing bases of U.S. oil and natural gas producers are likely to be reduced by at least 20% as the outlook for commodity prices remains grim, according to Haynes and Boone LLC. 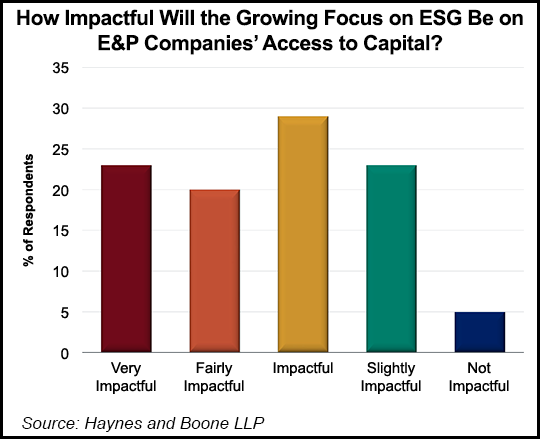 As it does twice a year, the law firm surveyed 207 executives from mid-February to late March about price decks, as well as expected borrowing base redeterminations for exploration and production (E&P) operators, which financial institutions conduct every spring and fall.

Most of the respondents were E&Ps (46%) followed by lenders (34%), along with oilfield services firms, private equity (PE) firms and alternative financiers.

Haynes and Boone’s Kraig Grahmann, head of the Energy Finance Practice Group, said the surveys initially were sent in mid-February, but they were sent again in early March as the coronavirus became a global pandemic and after Russia and the Organization of the Petroleum Exporting Countries launched an oil price war.

“The rapid deterioration in market conditions that started on March 8, 2020 had an immediate and deep impact on predictions about future borrowing capacity,” he said.

By comparison, 40% of the respondents in the fall 2019 survey forecasting borrowing bases would decline by about 10% during the bank redeterminations.

In a second survey Haynes and Boone gathered data about reserve-based lenders’ oil and gas price decks. Similar to the redeterminations survey, the initial surveys were sent in mid-February and then again in March, allowing the banks an opportunity to revise the price decks.

About 28% of the E&Ps surveyed expect to source most capital this year via cash flow from operations. Another 20% are likely to prowl for funds from alternative capital providers. Respondents were split on whether they would look to borrow from banks or from joint ventures with PE firms, both at 17% each. Another 8% were planning to trade equity with PE firms.

“When compared to the fall 2019 responses, survey participants who see private equity as a source of E&P capital have dropped by nearly 50%,” said Grahmann. “The difference is being made up for with debt from alternative capital providers.”

E&Ps entered the downturn relatively well hedged, raising questions about whether they may keep the price protections in place to preserve cash flow or monetize them sooner to enhance liquidity.

“The significant drop in bank price decks from last fall signal a significant drop in collateral value for oil-weighted producers,” said Haynes and Boone’s Buddy Clark, co-chair of the Energy Practice Group. “However, the continued uncertainty in global oil markets may give banks and borrowers an excuse to skip or postpone the spring borrowing base season.”

Natural gas prices “have been low for so long, gas is starting to look like a more bankable commodity in comparison to oil, which is now subject to more volatility to the down-side. Perhaps this will be a case of ”low and steady, wins the race.’”

Executives also were queried about the impact of environmental, social and governance (ESG) initiatives and whether they would be impactful on E&P access to future capital. Responses were mixed.