The voluntary bankruptcies by U.S. exploration operators have continued to mount, with Lower 48 oil production by the insolvent companies set to decrease from current volumes by around 25%, or 200,000 b/d, at the end of 2021, according to a Rystad Energy analysis. 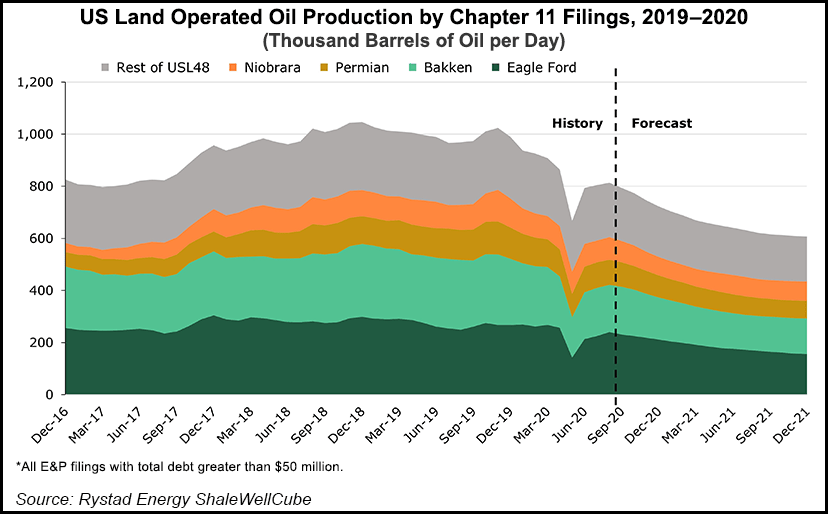 “Operated oil production from the recent Chapter 11 filings is heavily weighted in the Eagle Ford and Bakken regions, at almost 400,000 b/d,” analysts said.

Although it’s much bigger, Permian Basin-focused exploration and production (E&P) companies now going through restructuring only produce around 80,000 b/d total, the review found.

An estimated 800,000 b/d of oil production is operated by Lower 48 E&Ps that filed for bankruptcy protection in 2019 and in 2020. With limited capital spending and completion activity anticipated, “we anticipate production from this group will decline further to 600,000 b/d by late-2021,” analysts said.

The same peer group produced around 8.5 Bcf/d gross of natural gas production in the Lower 48.

“While some of this is associated gas, which will track oil output from the different oil basins, we do not expect any significant production declines in the Appalachia and Haynesville regions as operators who have filed for Chapter 11 are maintaining adequate activity levels there,” analysts said.

Rystad’s preliminary 2021 guidance summary, based on U.S. E&P 3Q2020 earnings reports, indicated that still active publicly held oil-focused producers are “targeting to just maintain activity levels next year. We may see sequential production growth somewhere in the 80,000-120,000 b/d range between the last three months of this year and the fourth quarter of next year.”

The supermajors and private E&Ps are expected to post “marginal” production increases.

“Chapter 11 filings affect the whole industry,” said Rystad’s Artem Abramov, head of Shale Research. “Most of the growth in U.S. tight oil, which was expected toward the end of 2021, is at risk to be offset by the decline in output from companies that have filed for restructuring in the last two years, as most of them are currently in their base decline phase with limited new well activity.”

The E&P group that sought bankruptcy protection in 2019, many of which have completed restructuring, “have only spudded seven U.S. onshore wells since the second quarter of 2020,” according to Rystad’s research.

“The slow post-restructuring recovery is largely related to the market downturn,” analysts said. However, regardless of the price environment, the group of E&Ps that have sought Chapter 11 is “unlikely to come back” with significant capital spending increases before the second half of 2021.

E&Ps that filed for bankruptcy to date in 2020 have drilled only 15-30 wells a month since August. However, Chesapeake Energy Corp. and Colorado-focused Extraction Oil & Gas Inc., which both sought protection in June, “were responsible for nearly all of those wells,” according to Rystad.

“If we exclude Chesapeake and Extraction and focus on the remaining cases, then the current spud rate is negligible compared to the 100-140 wells per month that the peer group was delivering in 2017-2018.”