By confirming that Pioneer Natural Resources Co. and Enterprise Products Partners LP may export condensate under existing regulations, the Obama administration was seen by some as cracking the door to potential wider export of liquid hydrocarbons — someday. 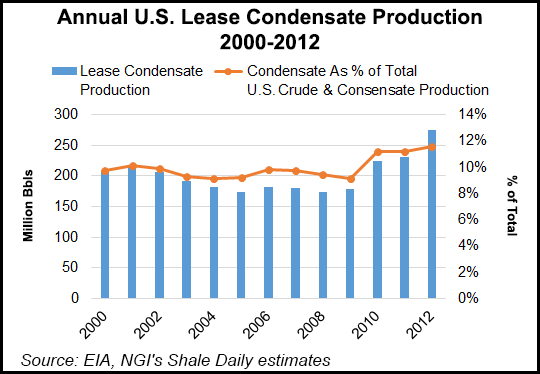 In separate private rulings that had not been released Wednesday, the U.S. Commerce Department’s Bureau of Industry and Security (BIS) confirmed that the companies may export processed condensate from the Eagle Ford. The rulings are narrow and apply to only the two companies, but they could be a harbinger of more to come.

“The only necessary requirement is that condensate be processed through distillate towers to remove the light ends, at which point the product can then be exported,” Wells Fargo Securities analysts David Tameron and Gordon Douthat said in a note, in which they cited discussions with Pioneer management. Pioneer “…indicated that no timing or volume restrictions are in place.”

Commerce Department spokesman Jim Hock said in a statement that “there has been no change in policy on crude oil exports…Consistent with the [existing] regulatory definition, crude oil that has been processed through a distillation tower which results in the crude becoming a petroleum product is no longer defined as crude oil. Petroleum product can be exported without a license, except in very limited circumstances.”

The rulings were reported by The Wall Street Journal late Tuesday. In a note Wednesday morning, Tim Evans, an energy futures analyst with Citi, said the news was giving buoyancy to the West Texas Intermediate (WTI) crude market, but he added that the enthusiasm might be overblown.

“There may be much less to this story than meets the eye…as it appears this was more of an official confirmation that minimally processed condensates are classified as a product under export rules rather than falling under the crude oil export ban,” Evans wrote.

The Obama administration has been seen as edging toward relaxing crude export restrictions, and condensate has been seen by many as the first step. Earlier this year, energy lawyer Jacob Dweck, a partner with Sutherland, Asbill & Brennan LLP, said at a Houston industry conference that “a compelling showing” could be made for allowing export of ultralight U.S. crude oil and condensate because it cannot be reasonably marketed in the United states due to a supply-demand imbalance (see Shale Daily, Jan. 23).

Rainey characterized the BIS rulings as merely confirmation that processed condensate may be exported. Enterprise, he said, has always had the ability to export such condensate. “What this did was it just provided us with some reassurance of what our position had been all along,” he said, adding that he could not provide any details on the company’s commercial activities related to exports.

The move by BIS was seen by analysts as a win for producers, particularly those in the condensate-rich Eagle Ford, and as a loss for domestic refiners. “…[T]he specter of looser export restrictions should slow the pace of major refinery upgrades,” analysts at Tudor, Pickering, Holt & Co. said in a note Wednesday. Analysts at Goldman Sachs said recently it would be best to restrict crude exports until domestic refining capacity reaches its full potential (see Shale Daily, June 11).

But for Eagle Ford producers, the export allowance may be a welcome relief valve for condensate overstock in the Gulf Coast region.

Pioneer is one of the largest Eagle Ford producers with net production of more than 43,000 boe/d. A large slice of the company’s Eagle Ford production is condensate, which is characterized by the industry as having an API gravity of 50 degrees or higher.

Export administration regulation restrictions on crude oil exports, which are administered by BIS, do not apply to hydrocarbons that have been processed through a distillation unit, Pioneer said. “The stabilization process at Pioneer’s Eagle Ford Shale central gathering facilities involves a distillation unit that lowers vapor pressure and removes volatile lighter hydrocarbons.

“Earlier this year, following discussions with BIS, Pioneer filed a submission under BIS’s standard commodity classification process. BIS recently confirmed our interpretation that the distillation process by which our Eagle Ford Shale condensate is stabilized is sufficient to qualify the resulting hydrocarbon stream as a processed petroleum product eligible for export without a license.”

The Wells Fargo analysts, as well as Gabriele Sorbara with Topeka Capital Markets, tipped Eagle Ford producers Rosetta Resources Inc. and SM Energy Co. as beneficiaries of the rulings, too. Topeka has a “buy” rating on Rosetta and SM Energy, “…which are both trading at discounts given their high condensate production volumes and prior concerns over a product glut and widening price discounts…” Sorbara wrote.

“We have yet to confirm with other Eagle Ford producers if they have applied for permission to export condensate…” the Wells Fargo analysts said in their note, “though should additional exports be permitted, we believe those who most stand to benefit include [Rosetta and SM Energy] and to a lesser extent…[EOG Resources Inc., Devon Energy Corp., Penn Virginia Corp. and Carrizo Oil & Gas Inc.].”

Tameron and Douthat wrote that Pioneer is in talks with midstream services providers and is “working towards a marketing solution” to export Eagle Ford condensate, estimated by Wells Fargo to be 35,000-40,000 b/d gross as of the first quarter.

More broadly, they added that “…rather than a blanket lifting of the ban, even for just condensate, the current administration used a private ruling to largely bypass potential political hurdles. Nonetheless, Tuesday’s news appears to be a first step toward easing U.S. crude export restrictions and on the margin should benefit condensate producers, most directly in the Eagle Ford, but on the margin should also start to alleviate WTI’s discount to Brent, all else equal.”