The U.S. government has committed to exporting up to 353 Bcf of natural gas to the UK next year as part of a strategic partnership aimed at strengthening commodity markets in Europe. 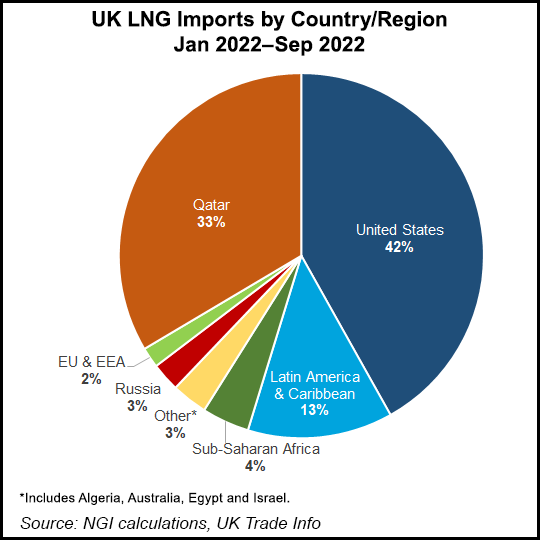 As a part of the initiative disclosed Wednesday, called the UK-US Energy Security and Affordability Partnership, the countries have formed a joint action group. UK and White House officials said the partnership could stabilize global energy markets and lessen dependency on Russian commodities. Under the agreement, the United States would strive to export at least 318-353 Bcf, or 9-10 billion cubic meters (Bcm), over the next year.

Russian President Vladimir Putin’s war “has caused an international spike in energy prices,” stated UK Prime Minister Rishi Sunak’s office. “To help deal with the resulting rise in the cost of living, the group will work to ensure the market delivers sustained increases in the supply of liquified natural gas to UK terminals from the U.S. and will collaborate on energy efficiency measures.”

The pact emphasized avoidance of a short-term energy crisis. Additional cooperation on energy efficiency and curtailing gas demand during the winter also was included. The UK is now estimating an 8% reduction in gas consumption during the heating season. The partnership could also involve cooperating on future renewable energy investments including nuclear power.

The UK has historically relied on Russian gas imports less than other European countries, but the government has had to contend with market volatility and skyrocketing commodity prices as the invasion of Ukraine sparked competition for supply.

Weather forecasters predict a deep freeze may settle over Western Europe near week’s end. Rystad Energy on Tuesday said UK power prices eclipsed those in Italy as the most expensive in Europe.

The National Balancing Point, the natural gas benchmark for the UK, has traded above $40/MMBtu since the beginning of the month, about 40% over November prices. The Dutch Title Transfer Facility (TTF), the European benchmark, has held the premium over the Japan-Korea Marker (JKM) for most of the year. The TTF was trading at around $10 above JKM.

Poten & Partners’ Jason Feer, global head of business intelligence, told NGI the UK’s willingness to continue paying hefty prices for U.S. gas may be the deciding factor on whether it would continue to secure LNG volumes.

The partnership “appears to commit the U.S. to doing what it can to help the UK secure supply. but as the U.S. government doesn’t control any LNG production, I don’t see the agreement having any major tangible impact,” Feer said.

Earlier this year, President Biden vowed to help European allies by prioritizing regulatory approval for LNG projects, with an additional 15 Bcm sent to the continent this year and 50 Bcm annually through 2030. The United States surpassed that goal earlier in the year, with around 70% of all domestic LNG cargoes landing on the continent to date.

A limited amount of additional U.S. LNG volumes are expected to hit the market in the short term, with most projects now under construction expected to ramp up starting in 2024.

Senior commodity analyst Christin Kelley of Schneider Electric told NGI the limited existing infrastructure may leave the U.S. government with few options to increase output in the near term.

“The U.S. already sent 10 Bcm of LNG to the UK this year, so as long as the UK continues to price a premium in the global market, those volumes will continue to flow next year,” Kelley said. “Near term it seems unlikely for the U.S. government to intervene to force cargoes to Europe if the premiums aren’t there.”

Instead, Kelley said the real impact from the collaboration may be additional pressure on federal regulators to approve new LNG projects and associated infrastructure.