In a final push to win Pennsylvania, among a handful of battleground states crucial for his re-election chances, President Trump this week ramped up attacks on rival and Democratic nominee Joseph R. Biden Jr. over hydraulic fracturing, aka fracking.

Following a slew of television and online advertisements striking at Biden’s energy stances, Trump held several political rallies in hopes of galvanizing voters who work in the state’s thriving natural gas industry. He has characterized Biden as a candidate bent on banning gas extraction — though Biden insists that is not his position – and eliminating oil and gas jobs.

“The Biden energy shutdown would inflict deep pain on Pennsylvania,” Trump told a crowd of supporters during broadcasted remarks in the Lehigh Valley, in one of three campaign stops in Pennsylvania on Monday.

In the decade following discovery of Pennsylvania’s Marcellus Shale, the state became the second-biggest producer of natural gas in the country, behind only Texas.

In debates and on the campaign trail, Biden has at times stumbled over his words when explaining his position on fracking, providing Trump and supporters fodder for rallies and commercials. The former vice president has clarified that he wants to end new drilling on federal land, but not on state or private lands where the vast majority of drilling is done nationally. According to government estimates, 10% of gas is extracted from federal land, most of which is in western states including New Mexico and Colorado.

“I do rule out banning fracking because…we need other industries to transition to get to ultimately complete zero-emissions,” Biden said last week during his final debate with Trump.

The Democrat, who leads in polls nationally and in Pennsylvania with a week left before next Tuesday’s election, envisions an evolution from fossil fuels to renewable energy sources. He has called for a $2 trillion infrastructure and clean energy plan, one that he said would at once create jobs and combat what he calls the devastating impacts of climate change.

Biden has said his goal is to decarbonize the electric power sector by 2035 and, by shifting to renewables and by capitalizing on carbon capture sequestration to minimize the effects of ongoing development of fossil fuels, reach net-zero carbon emissions in the United States by 2050.

Many analysts say shifts underway within the domestic and global energy sectors lend credence to those targets.

“No matter who wins the election, renewable energy will continue to grow as a percentage of electricity production and will become the second-largest source of power generation in the U.S. by 2030, according to our forecasts,” said Morningstar’s Dave Sekera, chief markets strategist.

In contrast, Trump heralds his administration’s work to overturn regulations and open paths for increased oil and gas drilling. In the first presidential debate, he said, “I want beautiful, clean air.” However, he has largely dismissed climate change and positioned himself as a champion of the fossil fuel industry – and Biden’s polar opposite on energy.

Trump withdrew the United States from the United Nations global climate accord, aka the Paris Agreement, and his administration has worked to ease regulations governing fuel economy standards, carbon dioxide emissions from power plants, and methane emissions from oil and gas activity. Trump also has sought to expand drilling on federal land.

Author Ken McCarthy, a political observer who lives in suburban Pittsburgh, told NGI the gas industry is important in rural swaths of the state, owing to jobs created over the past several years. Energy jobs, he noted, total nearly 140,000 in the state.

Overall, however, polls indicate that energy employment does not rank atop a majority of Pennsylvanians’ political priorities. Citing Pennsylvania Department of Labor and Industry data, McCarthy noted that there are about 5.6 million nonfarm jobs in the state, with several sectors accounting for far higher levels of employment than energy. These include health care, education, social services and manufacturing. Many of these jobs are in Greater Pittsburgh and Philadelphia, where collectively a majority of Pennsylvania voters live.

“A lot of people in the cities don’t even know anyone who works in energy,” McCarthy said. “So it’s either not a big issue for them, or it’s a negative issue for them” in that they may oppose fracking because of environmental concerns.

That said, in a close race, strong support in a few counties could tip the scales. In 2016, when Democrat Hillary Clinton led narrowly in polls ahead of Election Day, Trump ultimately won Pennsylvania by only 44,000 votes.

This time around, a poll released Monday by the University of Wisconsin found Biden with the support of 52% of likely Pennsylvania voters, compared with 44% for Trump. That eight-point lead lies within the 5-10-point range found by several other recent polls, according to FiveThirtyEight. Nationally, Biden leads Trump by about 8 percentage points in the Real Clear Politics poll average.

Using history as a guide, Raymond James & Associates Inc.’s chief investment officer Larry Adam said the health of the broader economy usually dictates the outcome of a presidential election and helps explain the results of polls. The coronavirus pandemic and its adverse impacts on businesses’ earnings and employment levels this year “should be a headwind for President Trump, as no president in the post-World War II era has won reelection when a recession occurred in the two years preceding the election.”

Trump has said repeatedly in October the country is “rounding the corner” in managing the spread of the virus. The pandemic’s prominence, however, has hardly faded. Based on Johns Hopkins University data as of Monday, the seven-day average of new U.S. cases topped 68,700 – the highest recorded to date. The number of Americans hospitalized with complications from the disease had eclipsed 40,000 for the sixth consecutive day, which had not happened since August.

“The trends could be detrimental” to the president’s support, Adam said.

He said in the swing states widely thought to determine the outcome of the electoral college and the winner, poll averages show Biden leading in all six – Arizona, Florida, Michigan, North Carolina and Wisconsin, in addition to Pennsylvania.

That noted, in several polls, at both the national level and in swing states, Biden’s lead falls close to or within the margin of error, suggesting that Trump’s energy assault in Pennsylvania could prove well-targeted.

“It could be a substantially tighter race than currently anticipated,” Adam said. 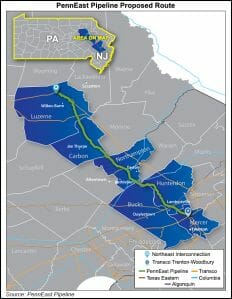 PennEast Pipeline Co. is for now dropping its years-long efforts to condemn state-owned land in New Jersey until it has more clarity on the beleaguered project’s timeline.  The state notified a federal appeals court this week that the company has agreed to voluntarily dismiss condemnation proceedings for the pipeline. Environmental groups, including the New Jersey…