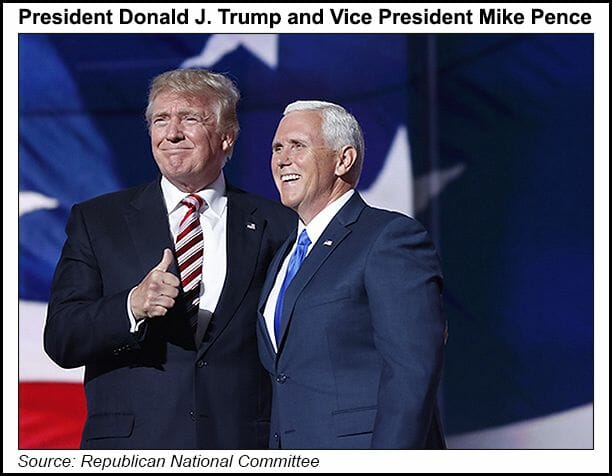 President Trump is betting that, by touting deregulation and deriding his Democratic opponent as an extremist who will raise taxes and throw wrenches into oil and gas development, he will galvanize domestic energy industry support ahead of the November election.

Culminating the Republican National Committee (RNC) convention Thursday night in Washington, DC, Trump claimed his administration had “secured for the first time American energy independence” with “record-setting tax and regulation cuts at a rate nobody had ever seen before.”

Biden “has spent his entire career on the wrong side of history,” Trump said Thursday night.

The 2020 energy platform put forth by Trump and the RNC ahead of the four-day convention mirrors what the GOP laid out four years earlier — the party re-adopted its 2016 program and professed blanket support for the president. Its emphasis is on continued deregulation to bolster U.S. oil and gas sector development and a sustained conviction that market-driven innovation will provide the foundation necessary to combat climate change.

“We support the development of all forms of energy that are marketable in a free economy without subsidies, including coal, oil, natural gas, nuclear power, and hydropower,” the RNC said.

“We firmly believe environmental problems are best solved by giving incentives for human ingenuity and the development of new technologies, not through top-down, command-and-control regulations that stifle economic growth and cost thousands of jobs.”

What’s new is the target of Trump’s criticism: Biden. The president said in an August speech, as his opponents’ convention unfolded, that the Democrat would pursue a costly and futile Green New Deal. “You know what you get out of that? Nothing. Nothing except debt and death,” Trump said. He labeled Biden “a puppet of the radical left.”

The president warned that Biden would bar hydraulic fracturing, aka fracking, and raise taxes on the energy industry.

“You want to see your taxes go up? Stop fracking?” Trump said. “They want to take your power away. You know what your power is? Your power is the billions of dollars you make on going deep into the Earth and taking out what you have to take out. Everything you want from fracking.”

Biden has maintained that he would not seek a national fracking ban but would prevent new drilling on federal land. Biden also has vowed to block the Keystone XL crude oil pipeline and end fossil fuel subsidies.

RNC Chairwoman Ronna McDaniel, in a speech Monday to launch the convention, railed against Biden and running mate Sen. Kamala Harris of California, saying their proposed policies would cost the United States millions of jobs and drive up household energy costs.

“Their argument for Joe Biden boils down to the fact that they think he’s a nice guy,” McDaniel said of Democrats. “Eliminating 10 million good paying oil and gas jobs and raising gas and heating prices on American families is not nice.”

The Democratic nominee’s campaign goals focus on continued transition to alternative energy, with net-zero emissions by 2050 and carbon-free electricity by 2035. Biden also has championed investments in electric vehicles and retrofitted buildings that require less energy to heat and cool.

Biden did not address oil and gas in his acceptance speech to close out the Democratic National Convention Aug. 20, but he emphasized a commitment to fighting climate change. He said the world faces an environmental crisis but one that presents “an opportunity for America to lead the world in clean energy and create millions of new, good paying jobs in the process.”

The Trump campaign, in contrast, touted the current administration’s increased oil and gas drilling and overturned regulations. Most recently, it lifted methane regulations for the oil and gas industry, advanced lease sales in the Alaska National Wildlife Refuge, and modified the Clean Water Act to hasten environmental reviews of infrastructure projects.

The incumbent’s campaign has heralded the president’s decision to withdraw the United States from the United Nations climate accord, the international deal to reduce emissions of planet-warming gases. President Obama helped negotiate the landmark agreement and put in place many of the energy regulations that Trump has since attempted to dismantle.

For the most part, the energy industry is backing Trump, arguing that deregulation and increased drilling bolster oil and gas growth, create jobs and ensure ample and reasonably priced fuel supplies.

Continental Resources. Inc. Chairman Harold Hamm, an outspoken supporter of the president, told analysts during an August earnings call that he’s banking on a Trump victory in November and is skeptical of Biden. It is “hard to contemplate the politics going forward if Biden should be elected,” he said. “Who knows how much he would get past Congress if the Senate is maintained” under GOP majority control?

Trade groups, including the American Petroleum Institute (API), walk a fine between backing policies and supporting specific candidates, but the industry’s advocates have cheered the president’s push for deregulation.

“We support greater access to production and an infrastructure system able to move supplies and meet growing demand” for both oil and natural gas, API’s Frank Macchiarola, senior vice president of policy, economics and regulatory affairs, told NGI. “We want to continue with the progress we’ve made over the last several years.”

Trump, however, does not enjoy unfettered industry support on all his policies.

For example, the administration’s recent decision to roll back regulations on methane emissions was welcomed by some exploration and production (E&P) companies, but openly challenged by the world’s majors, including BP plc, Royal Dutch Shell plc and ExxonMobil.

Among proponents of rolling back methane rules is the American Energy Alliance. President Thomas Pyle said the change was “recognition that the free market is a more powerful driver of environmental progress than top down government control.”

BP America President David Lawler, on the other hand, said the EPA’s repeal of methane limits was a mistake.

“Direct federal regulation of methane emissions is essential to preventing leaks throughout the industry and protecting the environment,” Lawler said.

“As part of our net zero ambition, BP is committed to halving our methane intensity by 2050 or sooner…These are all voluntary actions on our part and, while others are similarly engaged, not everyone is,” he added. “That is why we strongly believe that the best way to tackle this problem is through direct federal regulation, ensuring that everyone in the industry is doing everything they can to eliminate methane leaks.”

Rystad Energy’s Artem Abramov, head of shale research, said innovations in technology that made E&P more efficient “unleashed” the U.S. energy sector more than the persuasions of either political party.

For example, he said, the United States “catapulted” into the league of top producers worldwide in the previous decade, cultivating the country’s ample supplies, keeping fuel prices moderate. The increased production also has led to “maintaining macroeconomic stability with benign inflation despite supply disruptions amid geopolitical upheavals in the Middle East, North Africa and Latin America.”

“Boosted by thriving new production from shale and tight oil in response to advances in drilling technologies, production sky-rocketed through 2017” under Obama. The 7.2% compound annual growth rate (CAGR) over this period “is the highest in U.S. history for a single president, despite the oil market downturn in 2015 and 2016. It is in contrast with the broader opinion that Obama was generally more sympathetic towards the environment than his predecessor and successor.”

Production continued to increase after Trump entered the White House in 2017, with a CAGR of 7.1% during his tenure, despite the 2020 downturn. The United States became a net crude oil and total product exporter in late 2018 for the first time since the 1950s, and net imports/exports have hovered near zero since then, Abramov said. He suggested that continued advances in technology could play a more important role in the advancement of domestic energy than whoever presides in the White House.

ClearView Energy Partners LLC analysts said Friday Trump laid out “a set of organizing principles that could govern energy decisions during a second term,” based on deregulation and deglobalization.

This election, said analysts, “presents stark binary prospects for the renewable and fossil energy subsectors.” A Biden presidency could be bullish for energy transition technologies. In addition, a leaner domestic oil and gas supply could boost prices. Additional regulation and higher tax rates, however, would be a disadvantage for E&Ps.