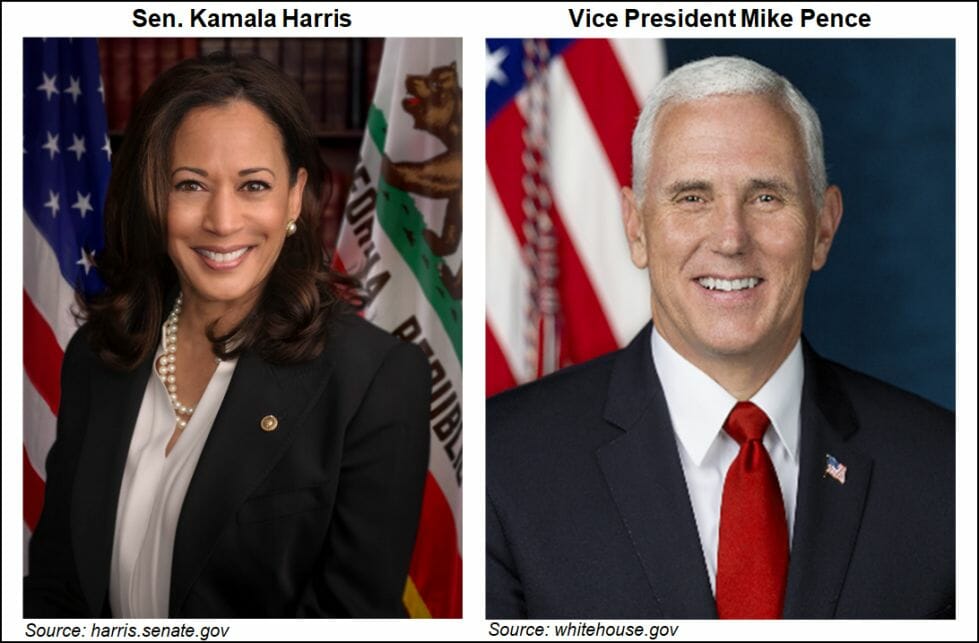 Energy and climate change figured more prominently during Wednesday’s contest in Salt Lake City than in the chaotic presidential debate that preceded it last week.

Pence during the debate accused Harris and Joseph R. Biden Jr. of plotting to ban the drilling practice, which has helped make the United States the world’s largest producer of oil and natural gas.

“First of all, I will repeat, and the American people know, that Joe Biden will not ban fracking,” Harris said in response to a question about Biden’s view of a so-called Green New Deal (GND). “That is a fact.”

Biden also has said in recent weeks that he would not ban fracking, which has helped transform his birth state of Pennsylvania into the cradle of the Appalachian shale gas patch.

Pence portrayed Biden and Harris as promoting a “radical” environmental agenda, including “a $2 trillion Green New Deal” that “would bury our economy…”

Biden has a $2 trillion climate plan, but it is not the GND. Instead, it aims for an emissions-free power sector by 2035 and creating thousands of jobs. Biden during the presidential debate also said he did not support the GND, which refers to sweeping climate legislation put forward in 2019 by Rep. Alexandria Ocasio-Cortez (D-NY) and Sen. Ed Markey (D-MA), and co-sponsored by Harris.

Biden’s website indicates that he views the GND as “a crucial framework for meeting the climate challenges we face.”

Harris during the debate stressed the urgency of addressing the climate crisis through investment in renewable energy. She also highlighted the economic benefits of overhauling infrastructure to achieve net zero carbon emissions by 2050.

On the economy more broadly, Harris said the Trump administration’s mishandling of the coronavirus had worsened the pandemic’s impact on American families, and that the trade war with China has hobbled U.S. manufacturing.

“On the issue of the economy I think there couldn’t be a more fundamental difference between Donald Trump and Joe Biden,” Harris said. Biden measures the economy’s strength “based on the health and the strength of the American worker and the American family.

“On the other hand you have Donald Trump, who measures the strength of the economy based on how rich people are doing.”

He declined to say whether human activity has contributed to rising global temperatures, but he celebrated the administration’s actions to date.

“I’m very proud of our record on the environment and on conservation,” Pence said. He also highlighted the role of natural gas in lowering carbon dioxide emissions from the energy sector.

The candidates also were asked about the open seat on the Supreme Court, a contentious topic this election cycle with major implications for the energy industry. Judge Amy Coney Barrett of the U.S. Court of Appeals for the Seventh Circuit is likely to be confirmed by the Republican-controlled Senate.

Democrats have been pressed on whether they would seek to “pack the court,” i.e. add more justices beyond the current nine. Harris avoided answering the question. With voting already underway, she and Biden each have said the American people should have the opportunity to decide the next appointment.

On the equally charged issue of election security, Pence, like Trump, declined to commit on whether they would accept the election results in the event of a Biden victory. Pence instead warned without evidence that voting by mail could lead to widespread voter fraud.

While the candidates clashed on almost everything Wednesday, not least energy and climate policy, they did appear to find some common ground on natural gas.

“Although they expressed it very differently, the debate underscored that both candidates recognize the value of natural gas to the economy, job creation and achieving our clean air goals,” Center for LNG executive director Charlie Riedl told NGI’s Shale Daily. “More than anything, natural gas is part of the solution.”

American Petroleum Institute (API) spokesman Scott Parker said, “The attention given to U.S. energy policy and climate change during last night’s debate demonstrates the importance of these issues to America and its future prosperity, and the natural gas and oil industry is uniquely positioned to address many of the issues both candidates raised.”

He added, “Rather than impede our industry with federal leasing bans – onshore or offshore – whoever wins the election should leverage America’s energy resources to advance U.S. national security, fuel our country’s economic recovery and power U.S. manufacturing. Biden has indicated he would ban new drilling on federal property.

In a post-debate note to clients, analysts at Clearview Energy Partners LLC wrote that, “the debate may have taken place in Utah, but Pence’s effort to define a Biden administration as a fracking foe” and the carefully worded responses by Harris “suggested to us that both parties remain focused on the 20 Electoral College votes in natural gas-rich Pennsylvania.”

The Clearview team noted that while energy and climate got more attention in this debate than the previous presidential match-up, “this is still not an ‘energy election’ year. Even though the election outcome could significantly change U.S. energy policy, voters’ perceptions of their health and economic well being seem much more likely to influence its result.”

American Gas Association CEO Karen Harbert wrote in August that the Democratic and Republican parties must keep in mind that affordable energy “is the bedrock” of the U.S. economy. “Increased use of natural gas is the single largest factor in power sector emissions reductions reaching 25-year lows.”

She added that U.S. natural gas utilities are committed to reducing greenhouse gas emissions through infrastructure upgrades, and that all sectors of the economy must commit to slashing emissions.

350 Action’s Tamara Toles O’Laughlin, director of the climate advocacy group, said after the debate, “we were glad to hear Kamala Harris call for a vision of the future rooted in science, and plan to get to net zero emissions by 2050.

“However, we still have a ways to go to hold Biden and Harris accountable to a bold climate action that is steadfast in its commitment to phasing off fossil fuels and halting the bad business of fracking.”