Supermajor Total SA’s year/year liquefied natural gas (LNG) sales increased by nearly 60% in 2019, driven by the start-up of liquefaction projects across the world, but its expansive holdings in the United States are expected to generate even more growth in 2020. 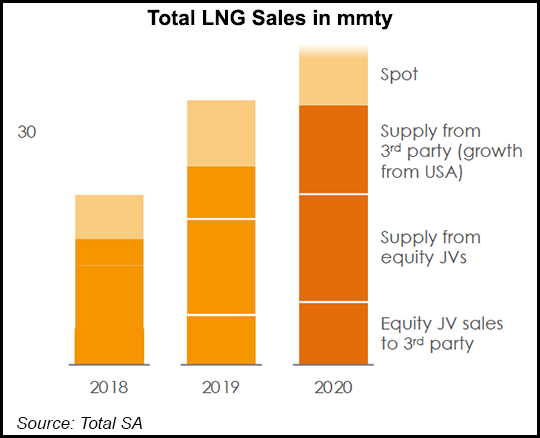 “We are becoming the largest exporter of U.S. LNG,” Total’s Philippe Sauquet, president of Integrated Gas, Renewables and Power (IGRP) segment, said Thursday. “We are making investments on the low prices in the U.S. for the long-term.”

While last year’s volumes were largely driven by the start-up of the Ichthys project in Australia in 2018 and Yamal LNG in Russia, the company expects the U.S. portfolio to account for the bulk of growth this year, which is again forecast at more than 30 mmt.

Total has equity production and long-term supply stakes in the Cameron, Cove Point, Freeport and Sabine Pass terminals in operation from Maryland to the Gulf Coast. The company also holds stakes in the proposed Driftwood LNG terminal and the Energia Costa Azul project in Mexico.

Sauquet said Russia also continues to contribute significantly to Total’s LNG portfolio, given the successive start-ups of trains at Yamal and the company’s ownership stake in Novatek, the country’s largest independent gas producer, which is developing the massive Arctic LNG 2 project. Total has a stake in the facility too.

Growth in the IGRP segment, said CEO Patrick Pouyanne, is actively “chasing all opportunities arising from what we call the energy transition,” including biogas, hydrogen and low-carbon electricity, has been driven by LNG.

Sauquet said the segment is becoming “more and more important” to overall results and accounts for 15% of cash flow, thanks largely to the global LNG portfolio, which includes production, trading, shipping, regasification and market development.

In China and India, which Sauquet said “are more continents than countries,” Total anticipates “dramatic growth” for the global gas market given ongoing coal-to-gas switching in the power sectors there. He acknowledged too that the world is currently swimming in natural gas as production has steadily ramped from Australia, Qatar, Russia and the United States.

“We have seen maybe too much” final investment decisions (FID) in 2018 and 2019, Sauquet told a crowd gathered in the UK to hear the year-end results. “The low-price environment could discourage a number of projects. On our side, we are not ready to take FID on projects that we think will not deliver the appropriate economy of scale and cost structure.”

Global gas prices continued to take a beating on Thursday, falling to record lows in North Asia on oversupply and fears over how the coronavirus outbreak in China might dent oil and gas demand worldwide. Benchmark gas prices in Europe are faring no better.

Fears were exaggerated after reports circulated Thursday that state-run China National Offshore Oil Corp., the country’s largest LNG buyer, declared a force majeure amid the outbreak and is rejecting some contracted shipments as efforts to contain the coronavirus disrupt shipping traffic and demand.

Reports also surfaced of delayed cargo discharges at some Chinese import terminals because of workforce reductions caused by the outbreak. If the virus were to disrupt gas trade in the country for a longer period of time, Sauquet said, Total would reassess the situation.

Given the volatility in both oil and gas, and a push to decarbonize across the globe, which threatens demand, Total plans to continue to focus on profitable growth in “integrated gas and low-carbon electricity chains,” management said.

The company is targeting cost reductions of more than $5 billion this year, while 2020 net investments should be about $18 billion. Since last year, Total has also sold $3 billion of assets as part of a broader $5 billion divestiture program for 2019-2020.