French supermajor Total SE aims to transform itself over the next decade by building its reach in the “two fastest growing energy markets,” liquefied natural gas (LNG) and electricity, the CEO said. 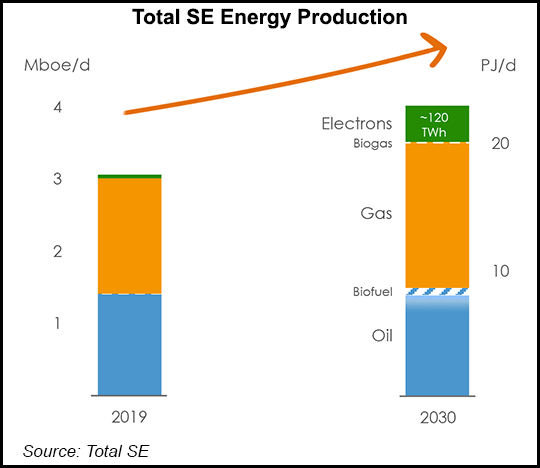 In presenting the Paris-based operator’s long-range strategy on Wednesday, CEO Patrick Pouyanné said the thrust is similar to other European-based majors. The outlook boils down to increasing energy production from LNG and electricity, while decreasing carbon emissions.

The goal is to become a net zero carbon emitter by 2050.

“Growing energy demand and getting to net zero are the two global trends underpinning the Total energy outlook and thus the evolutions of the energy markets that Total integrates into its strategy,” Pouyanné said.

“Our strategy derives from demand and energy markets’ evolution, not supply availability,” said the CEO. The focus is “on energy demand not energy supply. This was intentional because changing the world energy mix to meet the climate challenge will be a priority that will require changing the demand patterns together with our customers, together with society.”

Over the next 20 years, Total’s energy production is set to increase by one-third to roughly 4 million boe/d from 3 million boe/d. Half of the growth is to be in LNG, with the other half in electricity, mainly from renewables.

Total, one of the biggest LNG operators in the world, has equity production and long-term supply stakes from the U.S. export facilities Cameron, Dominion Cove Point, Freeport and Sabine Pass.

LNG sales are set to reach 50 million tons/year by 2025 and are set to double over 2020-30, “creating value from scale, arbitrage and integration along the value chain,” management said.

Cash flow from the integrated LNG business is set to expand by 40% to more than $4 billion in 2025 at an oil-linked price of around $50/bbl.

The company brand, which has changed from “Total SA” to “Total SE” is an evolution to “Total Energies,” he said, “with a big ‘S,’ a broad energy company,” Pouyanné said. He also said the company would be the first energy major to commit to reduce by 2030 its customers’ emissions, i.e. Scope 3, in absolute value compared to 2015.

To achieve carbon neutrality, Total plans to reduce the Scope 3 emissions of European customers by 30%, in absolute value, by 2030.

“Decarbonizing natural gas with biogas and hydrogen, as well as continuing to reduce methane emissions will contribute to Total’s climate ambition,” management said.

For the electricity business, Total is developing an integrated business model from production to sales through storage and trading. The target is 50 TWh net production and 80 TWh of sales to reach nine million customers by 2025.

“Building on the strong dynamic in 2020, Total will grow as a world leader in renewables, raising its objective to 35 GW gross capacity in 2025 (70% already in portfolio),” with an ambition to add around 10 GW/year thereafter.

Renewables and electricity are expected to deliver “predictable cash flow” of more than $1.5 billion/year by 2025. The focus for oil is on low-cost projects, Pouyanné said, “privileging value over volume,” with  “profitability above 15% at $50/bbl.”

The Group is also committing more than $1 billion over the next decade to the “e-mobility revolution,” by investing in battery manufacturing and electric vehicle charging with a target of 150,000 charge points by 2025.

The “time is right to accelerate growth in low carbon,” said the CEO. The “surge in demand for green energy and climate action is triggering a wave of supportive government policies and attracting new financial partners.” The support in turn in creating “opportunities to grow in new areas and unconsolidated markets.”

In all things, said Pouyanné, “discipline and flexibility will be maintained on capital investments with $13-16 billion over 2022-25, assuming an oil price between $50 and $60/bbl.

“Considering the short-term uncertainty and low price environment, capital investment for 2021 should be under $12 billion. Cost reduction efforts will be accelerated and increased by $2 billion by 2023.”

Even in the shift toward low-carbon businesses, Total still expects to increase upstream production by around 2% annually between 2019 and 2025, with most of the growth starting in 2022. Cash flow growth is forecast to be $5 billion by 2025, with a return on equity of more than 10% in a $50 oil price environment.