Lured by liquids-rich natural gas and growth prospects, Topaz Energy Corp. has snagged a share in Tourmaline Oil Corp.’s production from the Montney Shale in northeastern British Columbia (BC) for C$145 million ($116 million). 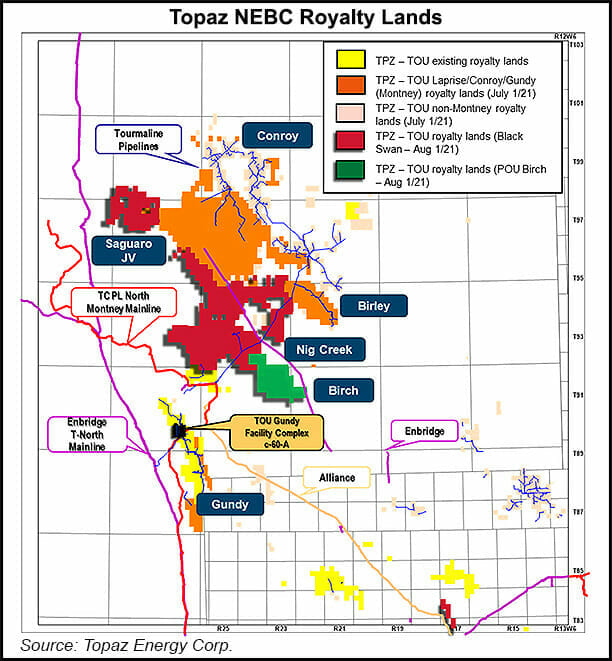 The deal announced Thursday gives Topaz 4% royalty interests in gas and 2.5% in liquids tapped by larger player Tourmaline Oil Corp. from 296,000 Montney acres. The gas share drops to 3% at the end of 2023.

Growth is built into the acquisition of a piece of Tourmaline’s BC action. Processing capacity additions now in progress are forecast to increase the royalty area’s total production by 20% to gas and liquids equivalent of about 60,000 b/d from 50,000 b/d. The well flows are 19% natural gas liquids.

“Tourmaline is well positioned to accelerate growth over the next decade in order to provide critical supply for future” liquefied natural gas (LNG) exports, the company said.

Counting the new deal, Topaz has paid a total of C$390 million ($312 million) for royalty interests in production from all 770,000 acres of Tourmaline’s northeastern BC properties.

The deal was unveiled prior to news that Tourmaline and Houston-based Cheniere Energy Inc. have signed an agreement in which the Canadian producer would supply the Corpus Christi LNG project in South Texas. Tourmaline has also set its sights on Canadian LNG exports.