Policymakers must ensure the supply of conventional energy sources alongside lower carbon ones as the energy transition marches on, according to Saudi Arabian Oil Co. (Aramco) CEO Amin Nasser. 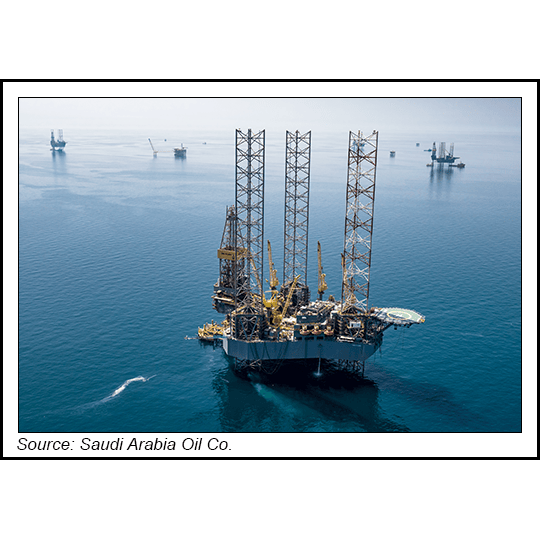 The head of the state-owned oil behemoth has been warning of the threats to global energy security posed by underinvestment in oil and natural gas.

“Many of us have been insisting for years that if investments in oil and gas continued to fall, global supply growth would lag behind demand, impacting markets, the global economy, and people’s lives,” Nasser said at the Schlumberger Ltd. Digital Forum in Luzern, Switzerland, according to a transcript.

“In fact, oil and gas investments crashed by more than 50% between 2014 and last year, from $700 billion to a little over $300 billion. The increases this year are too little, too late, too short-term.”

Meanwhile, oil and natural gas exploration acreage awarded so far this year has shrunk to a 20-year low of 320,000 square kilometers according to Rystad Energy. Global lease rounds are expected to total 44 this year, the lowest level since 2000.

Nasser said “the energy transition plan has been undermined by unrealistic scenarios and flawed assumptions because they have been mistakenly perceived as facts. For example, one scenario led many to assume that major oil use sectors would switch to alternatives almost overnight, and therefore oil demand would never return to pre-Covid levels.”

“Perhaps most damaging of all was the idea that contingency planning could be safely ignored,” Nasser said. “Because when you shame oil and gas investors, dismantle oil- and coal-fired power plants, fail to diversify energy supplies (especially gas), oppose LNG receiving terminals, and reject nuclear power, your transition plan had better be right.”

Meanwhile, IEA is forecasting world coal consumption to reach record levels not seen in nearly a decade next year amid tightness in the gas market.

“Global coal demand is being propped up this year by rising natural gas prices, which have intensified gas-to-coal switching in many countries, as well as economic growth in India,” the global energy watchdog said in Late July. Europe, for its part, is expected to see a 7% rise in coal use in 2022 after a 14% jump in 2021 as it scrambles to replace Russian natural gas supplies.

Nasser said Russia’s invasion of Ukraine “has certainly intensified the effects of the energy crisis, but it is not the root cause.”

The real culprits, he said, are underinvestment in oil and gas, a lack of readily available alternative energy sources, “and no backup plan.”

Nasser clarified, “we are not saying our global climate goals should change because of this crisis…and investing in conventional sources does not mean that alternative energy sources and technologies should be ignored. But the world deserves a much better response to this crisis.”

Aramco, for its part, is aiming to increase its oil production capacity to 13 million b/d by 2027, and to potentially increase its gas output by more than half through 2030 “with a mix of conventional and unconventional gas,” Nasser said.

He highlighted Aramco’s efforts to lower upstream carbon intensity, gas flaring and methane intensity, and to advance technologies such as carbon capture, utilization and storage (CCUS), which he said is “mission-critical to a sustainable future.”

One use of CCUS will be for the production of low-carbon hydrogen “blue” hydrogen made from natural gas. Aramco has announced plans to focus on exporting hydrogen, rather than LNG, as global demand for the former grows.