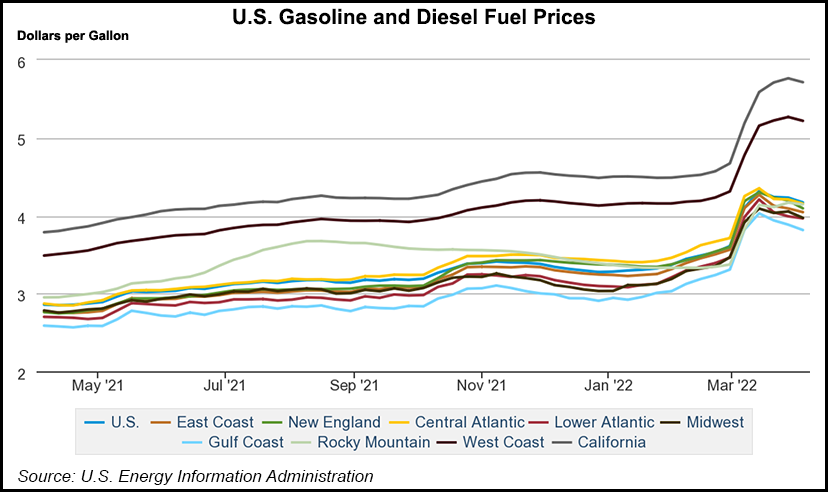 The exploration and production (E&P) chiefs shared their insight into the myriad reasons for rising commodity prices during a hearing before the House Committee on Energy and Commerce. Also testifying was retired U.S. Army Lt. General H. R. McMaster, now a senior fellow at Stanford University’s Hoover Institution.

Democrats blamed the high pump prices on producers during the hearing, while their Republican colleagues laid the blame at the feet of the Biden administration.

Neither a lack of production nor Biden energy policies are the reason pump prices are high, the executives said. All of them attempted to explain how oil prices are set. It’s a complex process, they noted.

In the United States, the end of pandemic closures, combined with the impact of the Ukraine invasion, have created turmoil in the energy markets, ExxonMobil CEO Darren Woods testified.

“As the world emerges from the impacts of the pandemic, we were already seeing a growing supply and demand imbalance in global oil and gas markets. The invasion of Ukraine increased the risk of insufficient supply – demonstrating how quickly global markets can be disrupted and impact the lives of every American.

“The uncertainty of supply in a tight market with growing demand leads to significant price volatility, which is what we are seeing today,” he said.

Russia “provides roughly 10% of the oil needed to meet global demand, and about 30% of Europe’s natural gas demand.” The loss of those volumes “would dwarf” the impact of the 1973 Arab oil embargo “and represent the largest supply disruption in the history of our industry,” Woods said. “The risk of this obviously puts upward pressure on oil and gas prices.”

There is no quick fix, he noted. The answer in the near term, “until there are more widely available and affordable alternatives, is straightforward. We need to increase the supply of oil and natural gas. And our industry has been doing just that.”

E&Ps are in the “depletion business,” Woods noted. The industry makes “significant investments just to keep production flat. On average, without investment, industry production declines roughly 7% per year. This requires a consistent commitment to investing across the commodity price cycle.”

“Continued investment in new production to offset depletion and meet growing demand is the only way to achieve balanced markets and more affordable prices, bringing real relief at the pump,” Woods said.

“Government plays a critical role in this,” he said. In addition, policies that reflect the importance of energy, create certainty and improve predictability, encourage industry investment, and ensure affordable and reliable supplies of energy.

“Consistent, efficient and effective permitting processes, whether for leases, drilling or infrastructure such as pipelines, or export applications, will help spur further investment in U.S. oil and gas production.”

BP America Chair David Lawler, like his colleagues, noted that the price of globally traded oil, gasoline and refined products are driven by international markets. Retail fuel prices are set competitively, not by the E&P. And most retail fuel stations are independently owned and operated.

No Tolerance For Price Gouging

Chevron CEO Mike Wirth repeated President Biden’s recent comments that “if we want lower gas prices, we need to have more oil supply right now.” The San Ramon, CA-based major is working to do that, he told the House members.

“Chevron has committed to increase its capital expenditure this year by 50%, with approximately half of that increase going to increasing oil and gas production and the other half going to renewable fuels and lower-carbon energy,” Wirth said.

“I want to be absolutely clear,” he said. “We do not control the market price of crude oil or natural gas, nor of refined products like gasoline and diesel fuel, and we have no tolerance for price gouging.”

Oil and gas prices are impacted by “factors that involve far more than one company or even one country,” Wirth said. “Gasoline prices are fundamentally a function of supply and demand.”

Wirth attributed the higher pump prices to a variety of things, including increased demand as Covid-19 restrictions were lifted and the uncertainty about future supply related in part to Russian energy bans.

Devon CEO Richard Muncrief said the Oklahoma City-based independent “began implementing our 2022 plan when events began unfolding in Ukraine. We are now seeing prices level off, but uncertainty creates volatility, and we are not out of the woods yet.”

Like other E&P executives who testified, Muncrief said it is taking longer today to secure applications for permits to drill, or APDs. In addition, ”the process to complete a well and bring it to full production may mean that a significant number of weeks transpire before a well reaches its potential.

“Now, with the significant delays in obtaining the materials needed to operate due to global supply chain constraints and a shortage of workers, the time has substantially increased and is now closer to six months,” Muncrief said.

Why Is There No Quick Fix?

Pioneer Natural CEO Scott Sheffield, who has been called out by legislators on Tuesday and President Biden last week for vowing to not expand Permian oil production even if prices approached $200/bbl, defended his comments.

“I understand the desire to find a quick fix for the recent spike in gasoline prices, but neither Pioneer nor any other U.S. producer can increase production overnight by turning on a tap. Pioneer and other U.S. shale operators sell their commodities when produced.

“We do not have spare production capacity or a private strategic reserve with which to quickly increase oil deliveries in response to market disruptions. Such a response is only possible in countries such as Saudi Arabia and the United Arab Emirates, whose national oil companies can quickly add production to the world market from surplus supply capacity that exists today.”

To plan, permit, drill and safely complete wells, along with building infrastructure, “takes 18 to 24 months for our company. It used to take less time in the past – in some instances only six to 12 months – but this timing is especially negatively impacted today.

Sheffield cited “increasing cost inflation, the loss of thousands of experienced oilfield workers over the past several years, the decommissioning of rigs and fracture fleets when oil prices were low in 2020, and significant shortages across our supply chain.”

Shell USA President Gretchen Watkins in her testimony said price gouging is illegal, and Shell plc and its affiliates would not engage in those types of activities.

“Numerous governmental and nongovernmental examinations, including by the Federal Trade Commission and the Energy Information Administration, have concluded that crude oil prices are the primary factor in determining gasoline prices,” Watkins said.

“Shell is therefore focused on providing the United States and the world with a stable, reliable, and accessible supply of the oil and gas needed to meet society’s energy needs, which is the most direct and significant contribution we can make to stabilize energy prices in the near term.”