Upstream oil and gas employment in Texas climbed to 183,400 in October, representing an increase of 2,300 jobs from September and the sixth straight monthly increase, the Texas Independent Producers and Royalty Owners Association (TIPRO) recently reported. 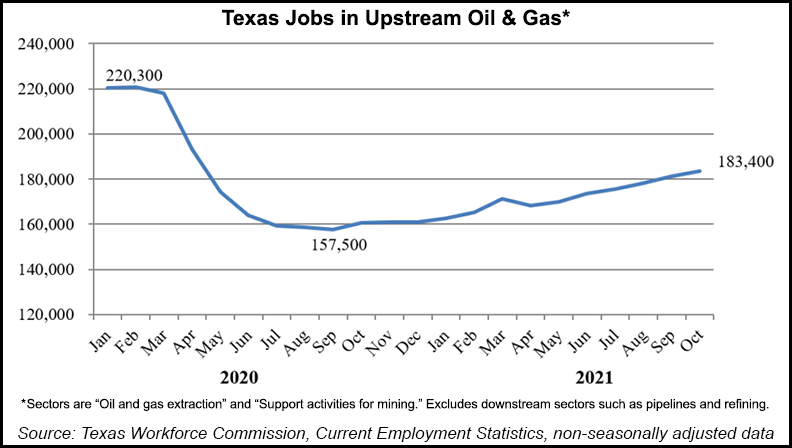 October’s jobs increase was somewhat less robust than TIPRO’s 2,900 increase for September, but the head of the trade association conveyed a positive outlook for the state’s upstream employment for the foreseeable future.

“Following a tumultuous year for the energy markets in 2020 and the lingering effects of a global pandemic, the law of supply and demand has driven commodity prices higher this year with a growing consensus around a new, multi-year super cycle for oil and natural gas,” said President Ed Longanecker.

Breaking down the year/year figures, TIPRO said a large majority of the new jobs — 21,900 — are in the services sector. The remaining 900-job increase from last year falls within oil and gas extraction, said the trade group.

Separately, the Texas Oil and Gas Association (TXOGA) said the state’s upstream jobs figure has grown since September 2020 in 11 out of the last 13 months. September 2020 was the most recent employment low point.

During the past six months, upstream job growth has steadily topped 1,500 each month and has averaged 2,500, TXOGA added.

Which Sector Has the Most Job Listings?

TIPRO said its latest workforce analysis also shows the demand for oil and gas talent remained strong in October across the upstream, midstream and downstream industry sectors. The trade group counted 64,819 total job postings for the Texas oil and gas industry for October. It found that 9,503 of the listings were unique, representing an 800 month/month gain in posted unique positions.

Reviewing the state’s oil and gas employment across 14 specific industry sectors, TIPRO said that support activities for oil and gas operations showed 2,265 unique job postings in October — the highest for the month. Crude petroleum extraction, with 1,650 postings, and petroleum refineries, with 1,217, took the second and third spots, respectively.

TIPRO said the three Texas cities with the most unique job postings for October included Houston (3,101), Odessa (707) and Midland (697). Odessa and Midland are in the heart of the Permian Basin.

The organization noted that Halliburton Co., with 727 unique job postings, topped its monthly breakdown of companies, followed by NOV Inc. (604) and Baker Hughes Co. (593). Halliburton and Baker, both based in Houston, are two of the top services operators in the country, while NOV is a leading drilling equipment supplier.

Heavy tractor-trailer truck drivers took the lead among posted occupations with 530 listings, along with maintenance and repair workers (518) and industrial engineers (360), TIPRO said.

The industry group also calculated the direct, indirect and induced economic impact of various upstream positions. It arrived at a multiplier effect of 6.7% per job for crude petroleum extraction — the highest impact from its analysis. The assessment also found a 5.4% impact for natural gas extraction, 2.4% for drilling oil and gas wells and 2% for support activities for oil and gas operations.

“The greatest risk to this positive momentum and our nation’s energy security is anti-oil and natural gas policies being pursued in Washington, DC,” he said.

Staples also noted that growth in upstream employment was “not guaranteed.” He urged policymakers not to “forfeit energy freedom for energy dependence. We must instead continue to encourage smart, science-based policies that advocate for homegrown production, domestic jobs and economic advancement that benefits all Texans and every American.”