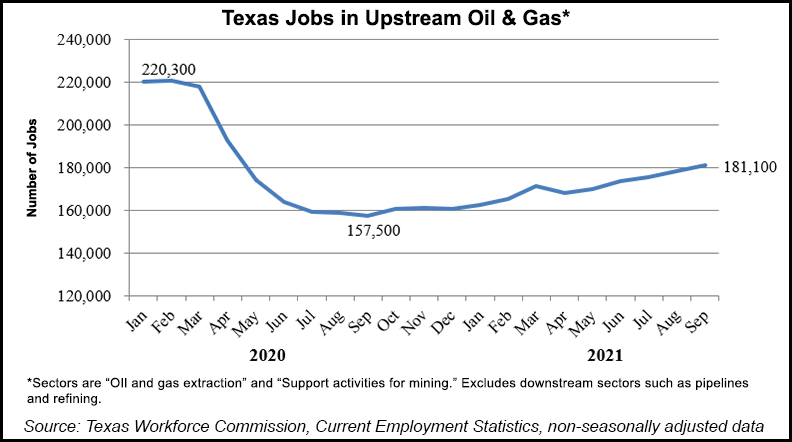 TIPRO based its findings on the most recent Current Employment Statistics (CES) report from the U.S. Bureau of Labor Statistics (BLS).

Another statewide industry association applauding the job gains was the Texas Oil and Gas Association (TXOGA).

“The resilience of the oil and natural gas industry is evident given that upstream jobs are up by 23,600, or 15%, in just one year since the low point in September 2020,” said TXOGA President Todd Staples. “These jobs are not only among the highest-paying jobs in Texas, these workers also play a direct role in our nation’s energy security and our pursuit of a cleaner, stronger, better future.”

Citing an analysis that it conducted with the American Petroleum Institute, TXOGA said that every direct oil and gas job in Texas generates another three jobs elsewhere in the state’s economy.

Where the Jobs Are

In its September workforce analysis, also released Friday, the Austin-based trade association observed 58,407 total Texas oil and gas industry job postings for the period — 8,703 of which were unique. That equates to a 7-to-1 posting intensity, meaning that for every seven postings there was one unique job posting, TIPRO explained.

Furthermore, the organization stated the 7-to-1 metric approaches the 6-to-1 posting intensity for all other occupations and companies in the region – indicating that companies are putting average effort toward hiring for these positions.

How to Sustain Employment Growth

Besides highlighting encouraging employment figures, TIPRO cautioned Congress against adopting “a myriad of restrictive domestic oil and natural gas policies” that it contends would further hike gasoline and utility bills as well as other goods and services prices already on the rise.

The association noted it is particularly concerned by a “disastrous national energy tax” in the $3.5 trillion reconciliation package Congress is considering. It maintains the tax would hurt small energy producers as well as U.S. taxpayers.

“After months of advancing policies designed to limit domestic production, the White House blames OPEC for not increasing supply more as demand has rebounded,” said Longanecker. “The lack of a coherent energy strategy for the U.S. will continue to have very real consequences for American families struggling to pay their bills and put food on the table.

“Instead of suppressing our industry and begging foreign adversaries to raise oil output, domestic producers should be encouraged to responsibly develop our resources here to help stabilize prices.”

“We need policies that encourage continued domestic production to meet increased demand here and around the globe,” he said. “More production means more jobs and more economic opportunities for Texans.”