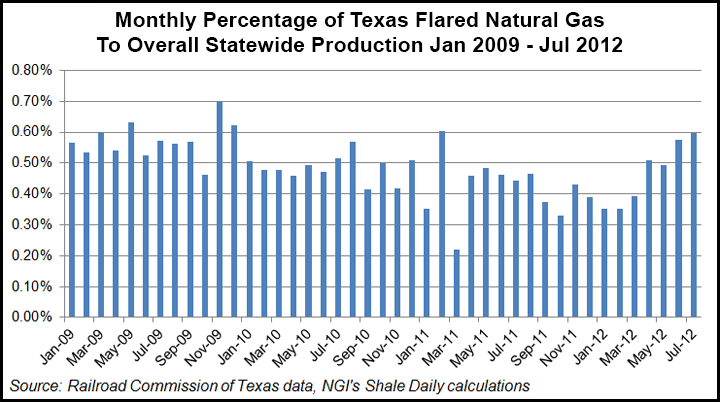 Porter is spearheading an effort to reduce the flaring of gas associated with oil production, particularly in the Eagle Ford Shale of South Texas (see Shale Daily, May 25). Last week Porter hosted a workshop at the RRC offices in Austin to discuss the potential to use gas that would otherwise be flared for on-site power generation.

According to the RRC, Texas is already doing better than most states on the flaring issue. For example, only 0.6% (as in less than 1%) of the production in Texas is being flared, compared to North Dakota, where 30% is being flared.

Panelists included oil and gas companies and service providers, as well as Commissioner Toby Baker of the Texas Commission on Environmental Quality (TCEQ) and Brian Lloyd, executive director of the Public Utility Commission of Texas (PUC).

Due to the rapid increase of production activities across Texas, there is a demand for power that cannot be filled under current conditions, Porter said. There is also a lack of pipeline infrastructure needed to carry all the natural gas being produced from the wellhead to market, creating an excess that traditionally would be vented or flared.

Porter is encouraging operators to look into ways to use excess gas produced at the wellhead as a source of power, instead of traditional electricity, in order to reduce the waste of natural gas and limit the environmental impact from air emissions.

“I believe a robust economy and environmental protections can coexist, and I commend Commissioner Porter for his efforts to encourage the use of environmentally protective flares, and to promote gas as a source of power for on-lease oil and gas operations,” Baker said. “The TCEQ and the Railroad Commission of Texas will continue to collaborate to accomplish the goal of safe, efficient energy production.”

James Gayle, CEO of Red River Compression Services LLC, gave a presentation at the workshop. “The workshop was extremely informative in that it not only afforded Red River the opportunity to present its products for flare gas reduction, but it also allowed our folks an opportunity to hear first-hand about the other companies’ approach to solutions, actual circumstances facing operators and clarification of regulations impacting operators and solution providers.”

The number of permits sought and approved to flare gas in Texas has been skyrocketing as rig activity continues in the Eagle Ford and in the Permian Basin (see Shale Daily, Jan. 19).

North Dakota has also seen an increase in gas flaring, thanks to development that continues to increase in the Bakken Shale oil play. Like Texas, the state also is addressing the flaring issue with efforts to put excess gas to use in the oil patch. The Energy and Environmental Research Center in North Dakota is set to launch a bi-fuel (natural gas/diesel) drilling rig power source in a demonstration project starting early next year (see Shale Daily, Dec. 3).