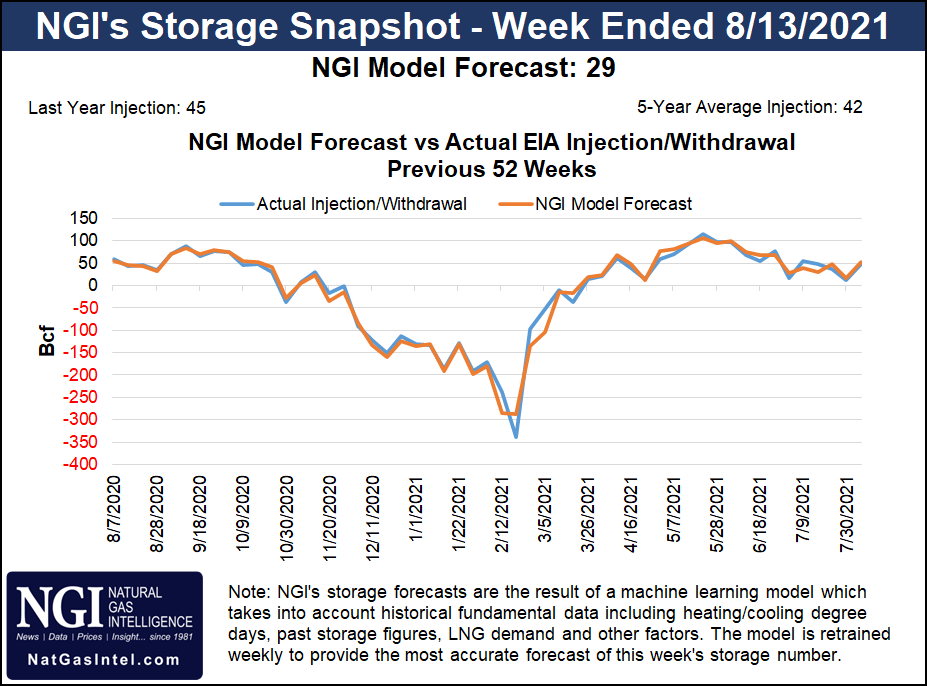 Spot gas prices were mixed on Monday, with mostly mild weather across the country. However, big gains in California sent NGI’s Spot Gas National Avg. up 16.5 cents to $3.950.

Though the peak of summer may be in the rearview mirror, hot weather remains in the forecast. Bespoke Weather Services said a “solid period of above-normal heat” is expected from late this week through the start of next week. The Midwest and East are forecast to bear the brunt of the hot conditions, though temperatures would likely fall short of the record levels seen last week.

Meanwhile, tropical activity has increased in recent days. The National Hurricane Center (NHC) said Tropical Storm Fred should make landfall in the eastern Florida Panhandle late Monday before moving over western Georgia on Tuesday. Maximum sustained winds as of 4 p.m. CT Monday were near 60 mph with higher gusts. Some strengthening was possible before landfall.

The NHC also was monitoring Tropical Depression Grace, which was expected to pass between Jamaica, Cuba and the Cayman Islands on Tuesday and Wednesday.

With increasing cloud cover and rains along the Gulf Coast because of Fred, and moderate weather over other key regions of the United States, futures action could be volatile this week. However, the fundamentals remain bullish and limit downside price risk, according to EBW Analytics Group. The firm noted that with the storage trajectory remaining far below required levels, support for the January contract should limit losses at the front of the curve.

Last week, the Energy Information Administration (EIA) said inventories had risen 49 Bcf during the week ending Aug. 6 to reach 2,776 Bcf. This is 548 Bcf below levels seen in the same week in 2020 and 178 Bcf below the five-year average.

Preliminary estimates ahead of the next EIA report, scheduled for Thursday, ranged from around 20 Bcf to 50 Bcf. NGI modeled a 29 Bcf build. This would compare with the 45 Bcf injected in the similar period last year and the 42 Bcf five-year average.

Energy Aspects said it is maintaining an end-of-October inventory level of around 3.55 Tcf, but there are several variables in play.

The firm noted that gas’ share of power generation fell below 60% for a string of several days last week. While some of this may have occurred because of higher prices, wind generation also hit its highest level since late June. “These days of weaker gas thermal share (even if only marginally weaker) give us confidence that price will be able to back off some power come September’s milder weather.”

Energy Aspects analysts also pointed out that the impending potential retirements of Exelon Corp.’s Byron and Dresden nuclear plants in PJM Interconnection still pose risks to shoulder-season gas burn. Even if Byron is saved, it would need to go offline for refuelling in September, causing the facility’s generation to coast down in the next three weeks. If the plants are retired, the market would require the equivalent of some 0.4 Bcf/d of gas burn to replace them.

“Refuels for units at both plants are in our gas burn forecast for 2H21; retirements are not, yet,” Energy Aspects analysts said.

Meanwhile, liquefied natural gas (LNG) has become an important component of overall U.S. demand. Recent weakness has allowed for “shallower” storage activity in the South Central region, according to Energy Aspects, with small net injections and much smaller withdrawals.

The Sabine Pass and Cameron LNG facilities operated at a reduced capacity last week because of maintenance. Though feed gas volumes have since rebounded, Energy Aspects said one of the main pipelines serving Sabine Pass is scheduled for maintenance this week. The terminal has alternatives for its feed gas, though.

Cove Point also is expected to undergo maintenance during the upcoming shoulder season. The turnaround, which could last about three weeks, would give inventories some 15-20 Bcf of padding, according to Energy Aspects.

Finally, the gas market may begin to see some production growth tied to the permitting activity that took place this spring, especially in the Haynesville Shale. The Permian Basin also is expected to see rising output.

Assuming heat does not persist into September — or, by the same token, early cold does not take hold in mid-October — these fundamentals could give cash prices a chance to slip below the psychological $4.00 point, according to Energy Aspects. “That said, risks of even a small correction stem from production showing up later in the shoulder season.”

Spot gas prices were mixed Monday, with the majority of U.S. pricing hubs posting moderate gains and losses of less than a dime or so. However, huge increases were seen out West.

In addition to the continuation of heat in the region, cash markets were roiled by the news of a pipeline blast on Kinder Morgan Inc.’s El Paso Natural Gas Pipeline (EPNGP).

Kinder said Monday that a segment of EPNGP near Coolidge, AZ, experienced a pipeline failure and subsequent fire on Line 2000 early Sunday. Two people died in the blast, and one other was injured.

The pipeline remains shut down and the site secured, according to KMI spokesperson Katherine Hill. An electric bulletin board notice indicated the operational capacity through the Cimarron constraint of 567,300 Dth/d would be reduced to zero beginning Monday, and remain in effect until further notice. The Washington Ranch storage facility was on maximum operational withdrawal.

Kinder Morgan is coordinating with the federal, state and local agencies on the response. An investigation into the cause of the incident is currently underway.

Elsewhere across the country, prices in the Rockies came off anywhere from a few pennies to as much as 9.0 cents. Texas spot gas prices were slightly higher for the most part, except in West Texas, where cash fell by the double digits. Waha dropped 10.5 cents to $3.580.

Midwest spot gas prices ticked up mostly a few cents on the day, as did those in the Midcontinent.

The hefty gains in New York, and across the Northeast, are because of a restriction put in place on the Tennessee Gas Pipeline (TGP) limiting eastbound flows in Livingston, NY. Wood Mackenzie said a scheduled pipe replacement on MLVS 236-1 would cut eastbound flows in Livingston, NY, by around 271 MMcf/d and receipts onto TGP in Ontario, NY, by around 269 MMcf/d. TGP anticipates secondary schedules to be limited as a result of this maintenance, but there is also potential for impacts to primary schedules.