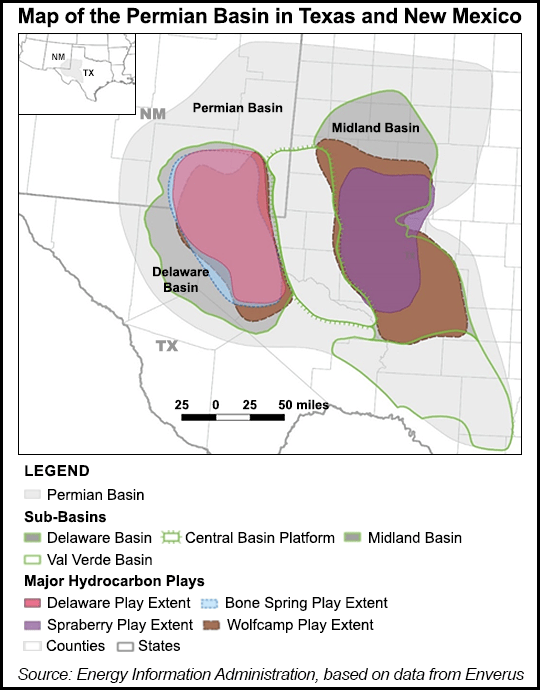 The Permian, which spans West Texas and southeastern New Mexico, accounted for about 30% of U.S. oil output and 14% of domestic natural gas production in 2020 – as measured by gross withdrawals – collectively more than any other region in the Lower 48, EIA data show.

“Operators continue to drill longer horizontal segments, or laterals, for wells in the stacked reservoirs of the Delaware Basin and Midland Basin,” researchers said. “The share of wells with 11,000-foot or longer lateral segments increased from less than 1% in 2014 to around 20% in 2021” across the entire Permian.

Through the first half of this year, Midland wells averaged lateral lengths of 10,000 feet, while Delaware wells averaged 8,700 feet. However, EIA noted, exploration and production companies operating in the Permian are in the process of testing laterals of more than 15,000 feet, with early results proving successful, the EIA team said.

“Although well lateral length is still increasing, proppant and fluid use has not changed significantly since 2017,” creating efficiencies, the researcher said.

Multi-well pad drilling, meanwhile, also is on the rise. In the first half of 2021, 25% of pads across the Midland and Delaware contained at least nine wells, according to Enverus data. This approach allows multiple wells to be drilled from a single site, or pad, adding to efficiency.

They noted, however, that “it also poses challenges for well spacing optimization, the risk of wellbore collision during drilling, and production interference during simultaneous hydraulic fracturing.”

Still, the average well count per drilling pad nearly quadrupled over the past decade, EIA said.

In a separate report this week, EIA forecast that U.S. onshore oil and natural gas production would rise from October to November, boosted by supply growth in the Permian, as well as the Haynesville Shale.

EIA’s drilled but uncompleted (DUC) well count indicates producers across the Lower 48 drew down their backlogs from August to September, with overall DUC total for the seven regions falling 241 to 5,385. The Permian entered the period with the largest backlog and saw its DUC total decline the most month/month, drawing down 125 DUCs to end with 1,869 as of September.