Another week of expansion in the oil patch, led by the Permian Basin, lifted the U.S. rig count five units higher to 533 for the week ended Friday, according to the latest figures published by Baker Hughes Co. (BKR). 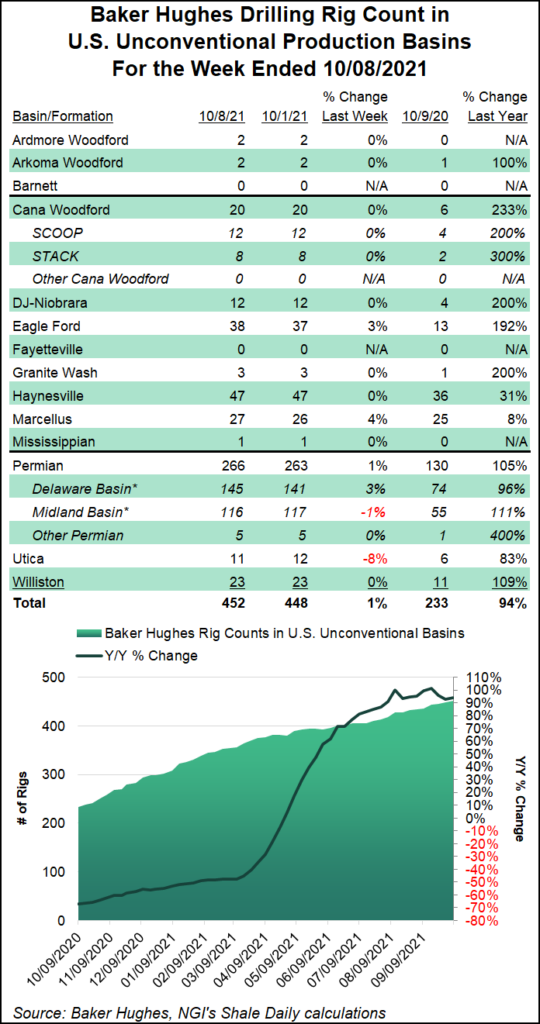 Natural gas-directed drilling went unchanged for the period, while the addition of five oil-directed rigs put the combined domestic tally at nearly double the 269 rigs active in the year-earlier period.

The Canadian rig count climbed two units week/week to end at 167, up from 80 at this time last year. Four natural gas-directed rigs were added there, partially offset by a two-rig decline in oil-directed drilling.

Broken down by play, the Permian led with a three-rig increase for the week, bringing its total to 266 rigs, more than twice the 130 rigs running there a year ago. Elsewhere among plays, the Eagle Ford and Marcellus shales each added a rig to their respective totals, while one rig exited in the Utica Shale.

In the state-by-state breakdown, Texas saw a net increase of four rigs, while West Virginia added two. California and Oklahoma each added a rig week/week, while Louisiana, Ohio and Pennsylvania each dropped one rig, according to BKR.

The agency predicted a nearly 50% increase in global energy use from 2020 to 2050. This is primarily a result of projected economic and population growth for nations outside of the Organization for Economic Cooperation and Development (OECD), particularly in non-OECD Asia.