The ability of North America’s natural gas market to respond to price spikes this winter may be limited on both the supply and demand sides of the equation, according to experts. 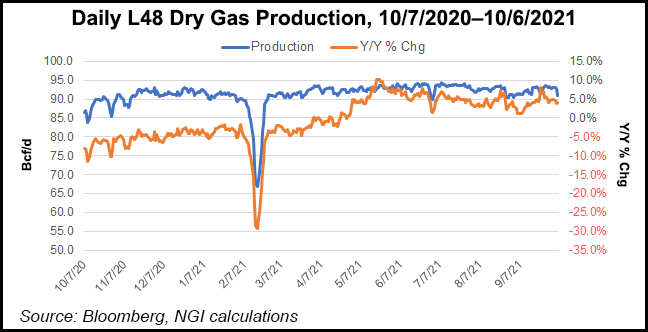 In recent years, Lower 48 gas producers would typically respond to high prices by ramping up output. However, the response to the current price surge has been more muted, said NGI’s  Leticia Gonzales, Price and Markets editor, in a recent presentation for Maxar WeatherDesk’s 20th Annual Energy Conference.

The relatively sluggish production response has partly been by choice, as publicly traded exploration and production (E&P) companies have prioritized capital discipline and returns over maximizing oil and gas output. Weather events such as Hurricane Ida, combined with stronger than expected heating demand over the summer and record liquefied natural gas (LNG) export demand, have all converged to leave U.S. gas storage inventories well below year-ago levels and the five-year average, Gonzales said.

She noted that the production trends have varied by region. The Haynesville Shale and Permian Basin are driving short-term production growth amid expanding pipeline capacity and increased connectivity to Gulf Coast export facilities.

Strong pricing could incentivize higher production in the Appalachian region as well, Gonzales said, but pipeline capacity is nearly maxed out. As a result, the Northeast still must depend on LNG imports to balance the market when temperatures drop.

“New England specifically is located not very far from some vast resources but the pipeline capacity to move that gas to market just isn’t there,” Gonzales told the audience.

Li said underinvestment in natural gas production has been particularly acute in the United States. The Organization of the Petroleum Exporting Countries and its allies, aka OPEC-plus, she said, have been “sitting on the sidelines” and enjoying the high prices of oil and natural gas.

Li also noted that U.S. coal inventories have been dropping below seasonal norms, heralding greater reliance on gas-fired generation this winter. The United States has retired 48 GW of coal-fired capacity over the last five years, according to the Energy Information Administration (EIA).

Further complicating matters, the capacity for gas-to-coal switching in the power sector in response to high prices is nearly maxed out as well, Gonzales said at the Maxar event. She explained that gas demand from the power sector over the last few months has remained steady even as prices have risen.

“You would think that at a certain price level that we’d see more coal coming into the generation stack, but we really haven’t seen that take place,” Gonzales said. “What that means is that gas to coal switching…has really been exhausted.”

U.S. natural gas storage inventories were 12.9% below the year-ago average and 4.9% below the five-year average as of the week ended Oct. 8, according to the EIA. Storage injections were below consensus forecasts.

Gonzales said based on current short-term forecasts for mild fall weather, the storage deficit is expected to shrink over the coming weeks, easing some of the market tightness. It will all depend, she said, on how long the mild weather lasts.

For the winter season ahead, meanwhile, forecasts are tracking for temperatures to be about 2% warmer than the 10-year historical average but 1% colder than last year, Gonzales said.

If temperatures come in colder than normal, or if a surprise event like Winter Storm Uri were to occur, current Henry Hub gas prices in the $5.00 to $6/MMBtu range “really could just be a bargain,” she said.

Warnings about the lackluster production response from exploration and production firms, meanwhile, have been mounting amid the increasing market tightness.

It is “the largest (and quickest) drawdown to date,” he said. “Over the last year, completions have outpaced new drills by nearly 250 wells/month, an unsustainable delta of which has never occurred.”

For production to maintain current levels – not to grow – there must be “a substantial influx in rigs, and therefore new drills are needed,” he said.