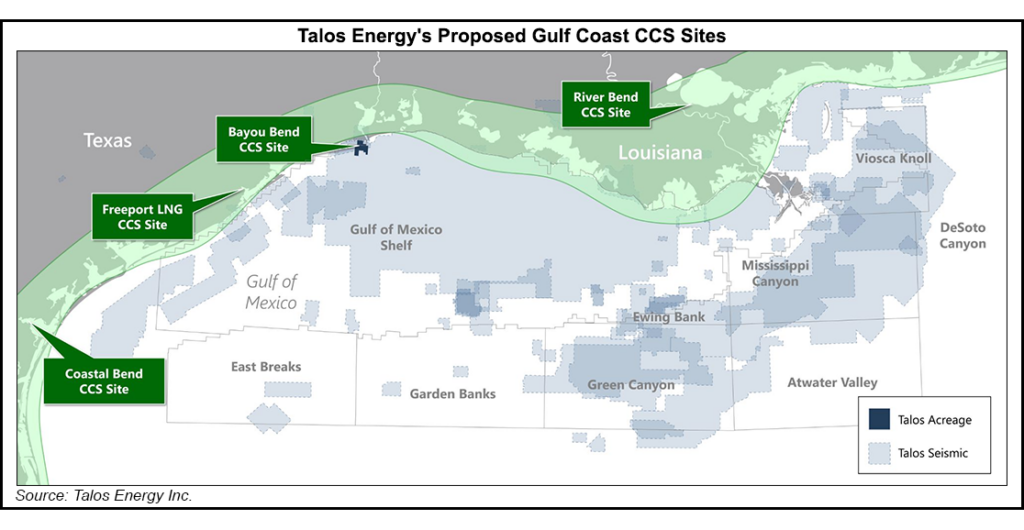 The independent issued its 2Q2022 results earlier this month, followed by a conference call helmed by Duncan. The quarterly results preceded the IRA’s passage through Congress and President Biden’s signature. However, Duncan was optimistic during the call about the benefits for Talos, both for the upstream business and the broad sweep of proposed carbon capture and sequestration (CCS) proposals for the Gulf Coast.

“We have always believed maintaining offshore leasing in the Gulf of Mexico is a good energy policy that provides energy security, energy production and energy jobs in one of the lowest carbon-intensive oil producing basins in the world,” Duncan said.

Among the pros in the legislation would be having the deepwater leases awarded to Talos as high bidder in last November’s federal GOM Lease Sale 257 reinstated, he noted. Talos had been one of the most active bidders in the auction and was the high bidder on 10 blocks totaling more than 57,000 gross acres.

The U.S. District Court for the District of Columbia rejected the results, citing an outdated emissions analysis by the Trump administration.

“The acreage we were the high bidders on in Lease Sale 257 has identified drilling opportunities that will be actionable in our longer-term drilling calendar,” Duncan said. “Additionally, consistent leasing is an important part of our strategy of responsible energy development.”

For the CCS business, the prospects to expand the Internal Revenue Service’s 45Q tax credit for carbon capture also is a positive, Duncan said.

“We believe we have put together one of the most attractive portfolios available for permanent carbon sequestration in close proximity to several industrial hubs, where these credits will allow decarbonization to become a priority.

“There is no doubt the legislation is an important step for offshore energy security and CCS development along the United States Gulf Coast.”

During the conference call to discuss 2Q2022 results, Duncan said the offshore plans are moving ahead. The executive team’s “intention is to use a constructive commodity environment to accelerate higher impact drilling opportunities in our portfolio, starting in the second half of 2022 and throughout 2023.”

Talos is taking possession of the deepwater drilling rig Seadrill Sevan Louisiana to begin an “open water drilling campaign, which will run through the remainder of 2022 and into 2023.”

The rig contract was extended to allow Talos to perform “six straight operations in which we plan to target at least four prospects totaling 65 million to 100 million boe of gross resource potential…” Individual well rates could be 5,000–15,000 boe/d gross.

With partners BP plc and Chevron Corp., Talos is participating in the Puma West deepwater appraisal well in the next few months. While not naming names, Duncan said Talos also is “actively working to finalize a five-block exploration unit in the Green Canyon and Walker Ridge areas with another large Gulf of Mexico operator that will lead to a high-impact exploration well in 2023 targeting both subsalt Miocene, Wilcox targets across nearly a 30,000 acre unit.”

Zama, ‘Not Easy’ But Important

At the Zama project in the GOM waters offshore Mexico, Talos is working with its Block 7 partners Wintershall Dea and Harbour Energy, as well as state-owned Petróleos Mexicanos (Pemex)  to finalize the field development plan (FDP).

The FDP has to be submitted to Mexico’s National Hydrocarbons Commission (CNH) by March. Once approved, Talos expects to move toward a final investment decision (FID) later in 2023.

“Simultaneously,” Duncan said, “we are also discussing the formation of an integrated project team or IPT, which is common in international projects.” The IPT “would provide a variety of roles in the project for all of the partners and enhanced governance rights for all the parties.

“In our opinion, that will significantly benefit the Zama project going forward. While the project has experienced significant delays during the unitization discussions, we’re encouraged that the project is advancing toward the submission of the final field development plan.

“The approval of the FTP is the last major hurdle before FIDcan be taken on this project by all the partners.”

Duncan reminded investors on the call about why Zama was a priority. Contingent resources, according to an independent third party engineering report, are more than 700 million boe gross.

“So, progress here still represents meaningful value for Talos to shareholders as we continue to move toward FID. Once the project is sanctioned, we would expect to be able to book proved reserves that, in this case, would represent multiple years of reserve replacement,” Duncan told analysts. “And we would have more certainty around final development timelines, financing and ultimately, first oil.

“Each step we are able to achieve in the coming months is important as we move closer to realizing significant value from this important discovery.” However, Duncan was not shy about noting the issues that have trailed Talos’ participation in the Mexico offshore field and delayed an FID.

“Navigating Zama has not been easy to say the least,” he said. “But I would like to reiterate that we are doing everything we can to maximize the value of this discovery for our shareholders.”

Meanwhile, the Talos Low Carbon Solutions team delivered “an important transaction in May,” by bringing Chevron Corp. aboard as a joint venture partner alongside Carbonvert Inc. for the Bayou Bend CCS project.

Bayou Bend, Duncan said, could be the “first and only” major offshore carbon dioxide (CO2) sequestration project. With Chevron in to cover the “material capital costs,” all of the expenses would be paid for ahead of the project’s sanctioning.

The capital “is being put to good use as we finalized plans to drill our stratigraphic well test in the fourth quarter,” Duncan said. The well would allow rock property data to be collected, which in turn would provide “critical information” for a Class VI injection disposal well permit to permanently sequester CO2.

As for Chevron coming in as a partner, “not only do they provide critical sequestration experience in an unquestioned balance sheet to the project, we believe it’s also another strong endorsement of the solid platform we are building as one of the CCS leaders in the United States,” Duncan said.

Overall GOM production in the second quarter averaged 65,400 boe/d. By core area, most of Talos production was from the 98%-operated Green Canyon blocks in the GOM, where output totaled 23,200 boe/d. Mississippi Canyon production, 58% operated, was 26,600 boe/d, while the Outer Continental Shelf and Gulf Coast (50% operated) averaged 15,600 boe/d.