The House on Friday passed the Senate-approved Inflation Reduction Act of 2022 (IRA) by a margin of 220-207, clearing the way for President Biden to sign the landmark climate and energy bill into law. 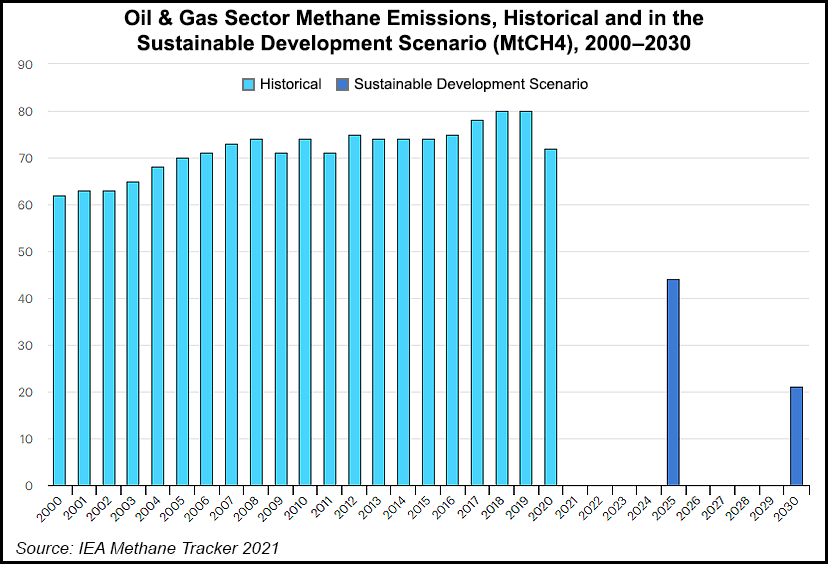 The legislation includes investing an estimated $370 billion to decarbonize domestic energy and transport sectors, and it targets a roughly 40% reduction in greenhouse gas (GHG) emissions below 2005 levels by 2030.

“We will make the largest investment in our nation’s history to address the climate crisis, creating good-paying, union jobs in wind, solar, and electric vehicle manufacturing,” said Harris after the House passed the IRA. “We will lower energy bills for working families and support environmental justice.

“And, the legislation is fully paid for by finally ensuring the wealthiest corporations pay their fair share.”

The oil and gas industry has offered mixed reviews of the bill, which mandates future lease sales on federal property and expanded support  for carbon capture and storage (CCS), two issues near to the hearts of fossil energy executives.

Executives from companies including Occidental Petroleum Corp., DT Midstream Inc. and Denbury Inc. have voiced positive comments about the bill, namely with regard to its CCS provisions.

The American Petroleum Institute (API) was less than thrilled about the tax-and-spend package.

“API shares the goal of addressing climate change, as evidenced in the policies we support and in the actions that our industry is taking every day. However, the considerable tax increases are simply the wrong policies at the wrong time.”

“As we said when the Inflation Reduction Act of 2022 passed the Senate, no piece of legislation is perfect,” said NOIA President Erik Milito. “However, we welcome passage by Congress of a bill which undoubtedly secures an all-of-the-above energy framework to boost offshore oil and gas, offshore wind, and carbon capture and storage — all key priorities for long-term American energy security. We are confident that the president will swiftly sign this into law, and that America’s offshore industry will keep doing what it does best: producing American energy.”

NOIA cited the reinstatement of Gulf of Mexico (GOM) Lease Sale 257 and a mandate for three subsequent offshore auctions to occur by the end of September 2023* among the bill’s favorable aspects.

The group also praised the bill’s authors for lifting an offshore wind leasing moratorium in the southeastern United States and eastern GOM, and for expanding the Internal Revenue Service Section 45Q tax credit for CCS.

‘Wrong Policies At The Wrong Time’

Other industry groups, such as the American Exploration and Production Council and the Independent Petroleum Association of America, joined API in opposing the bill.

API, along with nearly 60 other trade groups, sent a letter to House Speaker Nancy Pelosi (D-CA) and Minority Leader Kevin McCarthy (R-CA) voicing their concerns. They expressed issues with the corporate minimum tax increase, the Superfund tax and the methane fee.

The legislation also would raise the minimum corporate tax rate to 15%, impose a fee on energy companies for methane pollution, and revive a tax on oil and petroleum products. The funds would help the U.S. Environmental Protection Agency’s Superfund program to clean up toxic waste sites.

The legislation also levies a 1% tax on stock buybacks, a popular method for U.S. exploration and production firms to return cash to shareholders.

Citing two straight quarters of economic contraction in the United States, the groups said “the considerable tax increases and new government spending in the IRA amount to the wrong policies at the wrong time.”

They noted that “U.S. energy costs have increased 40% over the past 12 months, creating a serious strain on American household incomes.”

Sommers, for his part said, “From a new corporate minimum tax to an $11.7 billion tax on crude oil and petroleum products to a new natural gas tax, this legislation imposes additional costs on American families and businesses at a time when policymakers should be looking for solutions to provide relief.”

Methane is the main component of natural gas, prompting critics of the methane fee to refer to it as a natural gas tax.

Oil and gas industry concerns about the bill may well be warranted, according to analysis by Moody’s Investors Service published last week.

Large oil and gas companies that pay few income taxes “also tend to have some of the largest share buyback plans, which will make them the most affected by the new taxes,” said Moody’s analysts led by David Gonzales and Alastair Drake.

*A previous version of this story misstated the date by which the subsequent three lease sales must occur. NGI regrets the error.