Talisman Energy Inc. is shopping its Eagle Ford Shale acreage with hopes of raising up to US$2 billion, according to a Reuters report that cited unnamed sources. 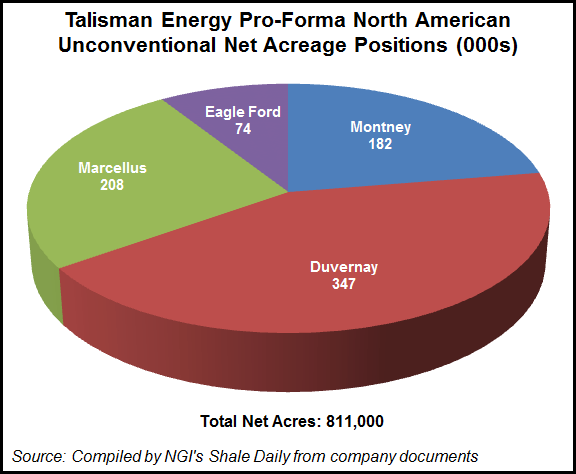 The Calgary-based company did not respond to a request for comment on the report. Talisman holds about 74,000 net acres in the Eagle Ford Shale in South Texas. In fall 2010, Talisman and Norway’s Statoil ASA formed a joint venture (JV) to acquire 97,000 net acres of Eagle Ford properties from Enduring Resources for $1.325 billion (see Shale Daily, Oct. 12, 2010).

According to Talisman’s website, the company is to transfer operatorship of the eastern part of the Eagle Ford to Statoil this year. The JV is to remain in force, with each company continuing to hold a 50% share of the entire play where the JV operates.

Talisman and Statoil plan to continue to develop the liquids-rich areas and expect to operate seven rigs this year, Talisman said.

While the company has said it was considering asset sales of $2-3 billion, including potential sale of Montney and Duvernay shale assets in Canada, the Eagle Ford properties were thought to be a core area for the company. Reuters’ sources cautioned that an Eagle Ford sale might not materialize.

Last March, CEO Hal Kvisle touted the company’s efforts to stabilize its balance sheet, in part by cutting debt by $750 million last year. He said at the time the company’s areas of focus would be the Americas and the Asia-Pacific region (see Shale Daily, March 7). Late last year, weak natural gas prices drove the company to cut its capital spending for this year by 25% (see Shale Daily, Nov. 1, 2012).