Rising coronavirus cases driven by the new Omicron variant are expected to curb but not derail a global recovery in oil demand, the International Energy Agency (IEA) said Tuesday in its latest Oil Market Report for December. 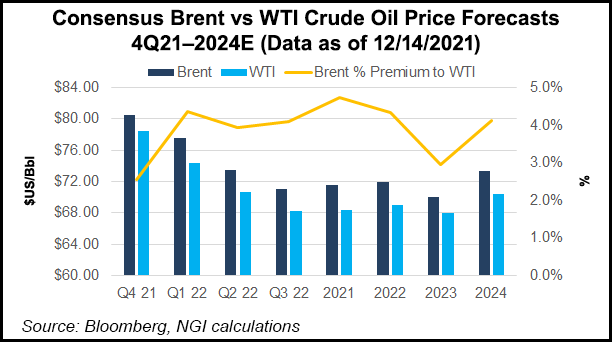 IEA noted that cases are climbing across many regions of the world in the wake of Omicron outbreaks that emerged last month, including in the United States. Temporary government restrictions on travel to slow the new strain’s spread, coupled with consumer hesitancy to fly while scientists study vaccine effectiveness against Omicron, will likely slow demand for jet fuel and gasoline derived from oil late in 2021, the global energy watchdog said.

IEA forecast global crude demand would grow by 5.4 million b/d this year, a downward revision of 100,000 b/d from the agency’s November report.

Still, they added, worldwide oil production is “poised to outpace demand” this month and into early 2022. IEA said this would be led by production growth in the United States and by the Saudi-led Organization of the Petroleum Exporting Countries (OPEC) and its Russia-led allies, known collectively as OPEC-plus.

Output was 600,000 b/d ahead of where it was during the first week of December last year, when the industry was in early recovery mode from pandemic-imposed disruption.

OPEC-plus, meanwhile, said earlier this month its members would boost production by 400,000 b/d in January, continuing a pace of monthly supply increases launched in August.

Should other countries such as Canada and Brazil further increase output as expected in 2022, IEA said global supply could soar by as much as 6.4 million b/d next year, compared with a 1.5 million b/d rise in 2021.

Supply and demand are projected to align in the first half of 2022, according to IEA. “Much needed relief for tight markets is on the way,” researchers said.