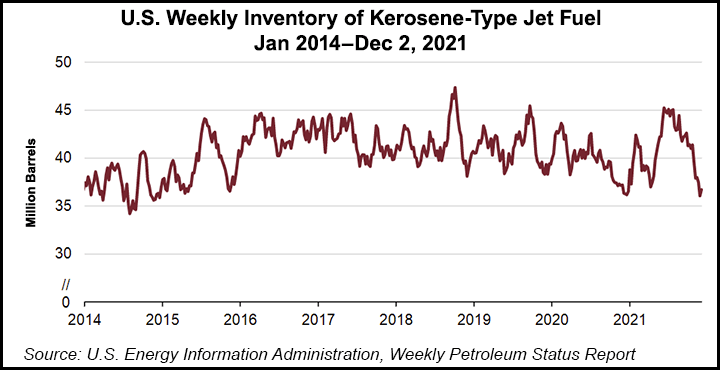 Jet fuel supplies had increased over the summer months as refineries ramped up output to meet rebounding demand for gasoline and distillate fuels. Refiners processed more crude to meet that demand, and jet fuel is a byproduct of oil refining.

“This increased demand, along with reduced production, has caused inventories to decline,” EIA researchers said.

Stockpiles of the transportation fuel fell to the lowest level since 2014 during the week ended Nov. 26, according to EIA’s Weekly Petroleum Status Report (WSPR). Supplies stood at 36.1 million bbl that week, down about 1% from year-earlier levels.

However, in its latest WPSR, covering the week ended Dec. 3, EIA said that the jet fuel trajectory suddenly flipped.

The new Omicron variant of the coronavirus forced at least a temporary pullback in air travel that week. Overall demand for petroleum products in the Dec. 3 period dropped 2% week/week, led lower by a pullback in jet fuel consumption. Jet fuel demand of just 1.2 million b/d for the latest covered week was the lowest since the week ended June 4. It had topped 1.7 million b/d during the Nov. 26 week.

Rystad Energy analyst Louise Dickson said the new variant reminded that the virus remains a wildcard that could cause sharp retreats in demand, particularly if cases surge and travel restrictions are imposed. She noted this is a global challenge.

U.S. demand for petroleum products nevertheless is holding strong relative to 2020, when consumption was curbed by the pandemic’s fallout and vaccines were not yet available.

Total U.S. oil inventories, excluding those in the Strategic Petroleum Reserve, decreased by 200,000 bbl from the previous week. At 432.9 million bbl, inventories for the Dec. 3 week were 7% below the five-year average. 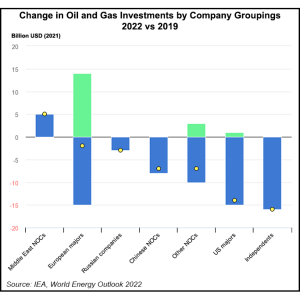 While investments in the global energy industry are expected to jump 8% from 2021 to 2022, investments in fossil fuels have not returned to pre-pandemic levels, according to the International Energy Agency (IEA). Investments in upstream oil and natural gas activities are projected to rise 10% year/year in 2022, but are likely to fall short…