Total SE recorded a big loss in the second quarter and took an $8.1 billion impairment as oil, natural gas and liquefied natural gas (LNG) prices all declined precipitously and the global economy reeled from the Covid-19 pandemic. 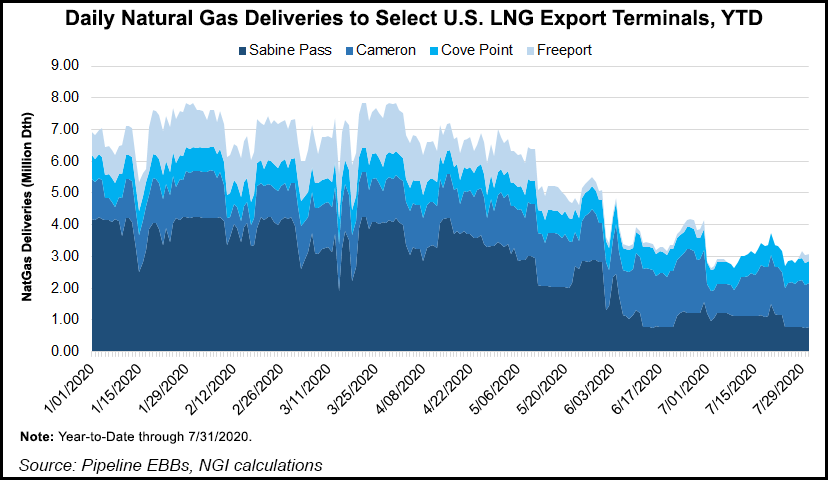 An oil market crisis, historically low natural gas prices and the economic slowdown in Europe decreased petroleum product demand at the company’s retail networks and dented its earnings, as other supermajors have also reported.

Total said its year/year realizations for Brent crude slipped by 57%, while its Henry Hub prices were down 30%. The average European gas price realized at the National Balancing Point in the UK declined by 59% over the same time, while the average realization at the Japan Korea Marker in North Asia fell by 57%.

As a result, the company said its average LNG sales price was down by more than 20% to $4.40/MMBtu. But overall LNG sales increased by 22% year/year to 10.4 million tons in the second quarter as spot trading activity increased due to deferred lifting by long-term contract buyers.

CEO Patrick Pouyanne said the company’s traders are considering cancelling about 30 U.S. cargoes as it isn’t profitable to move them to overseas markets given current spreads. He did not specify when those cargoes might be cancelled, but NGI calculations show U.S. LNG exports are out of the money until October in Europe and September in North Asia.

Total has equity production and long-term supply stakes in the Cameron, Cove Point, Freeport and Sabine Pass export terminals in operation from Maryland to the Gulf Coast.

CFO Jean-Pierre Sbraire said Total cancelled nine U.S. cargoes during the second quarter. The company also expects the decline in oil prices during the period to have an impact on long-term LNG contract prices in the second half of the year. The cost of oil-indexed LNG is typically based on the previous three- to six-month average of crude.

Adjusted net operating income for the Integrated Gas, Renewables and Power segment, which includes the company’s global LNG operations and has been a major growth driver, declined by 24% year/year to $326 million, while cash flow from the segment also fell. Total said the segment was mainly impacted by the sharp drop in natural gas prices.

Total produced 2.8 million boe/d in the second quarter, down from 4% in 2Q2019. While oil prices strengthened last month, the commodity market remains volatile “given the uncertainty around the extent and speed of the global economic recovery post Covid-19,” management said.