Statoil ASA on Thursday plans to begin delivering its U.S. natural gas produced in the Marcellus Shale to Canada to secure better prices. 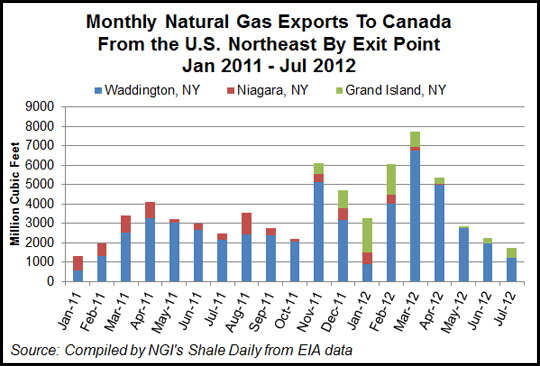 CFO Torgrim Reitan told analysts during a recent quarterly earnings conference call that the gas would be delivered to Toronto “instead of around the Marcellus area.” In Canada, he said during a conference call, “prices are much higher.” The Norwegian producer also lowered its estimates for U.S. production next year by 25,000 boe/d because of low gas prices.

“In dealing with gas in the U.S., it is extremely important to take care of your gas and then add additional value through how you deal with your gas,” Reitan said. During 3Q2012 Statoil’s Marcellus acreage, in which it partners with Chesapeake Energy Corp., produced more than 63,000 boe/d. Chesapeake took Statoil has a drilling partner in November 2008.

Statoil has been taking care of its Marcellus gas output through a series of agreements in the past two years that enable it to move its production north. According to U.S. Energy Information Administration data and NGI‘s Shale Daily calculations, total U.S. natural gas exports to Canada in May, June, and July 2012 were all lower year-over-year, so Statoil ‘s decision could help reverse or at least lessen this trend.

Two years ago, Statoil Natural Gas LLC signed up for 100% of the capacity on National Fuel Gas Co.’s Northern Access expansion project (see Shale Daily, Oct. 31; Nov. 10, 2011; March 10, 2011). The pipeline expansion would carry up to 320,000 Dth/d of Marcellus gas to an existing interconnection with TransCanada Pipeline at the Niagara River near Lewiston, NY, for delivery to markets accessible on the TransCanada system. The Statoil agreement included a 20-year firm commitment for all of the available capacity from the Ellisburg Station in Pennsylvania.

In addition, Statoil Marketing and Trading Inc. last year agreed to a memorandum of understanding to supply Canada’s Nova Chemicals Corp. with a long-term supply of Marcellus Shale ethane (see Shale Daily, Aug. 2, 2011). The ethane would be transported to Nova’s ethane cracker at Corunna, ON, which is part of a refinery and petrochemical complex in Sarnia-Lambton’s Chemical Valley. The cracker has a processing capacity of 1.8 billion pounds per year.

“We are planning a gas pipeline to Manhattan, coming up near Penn Station, the first crossing of the Hudson River in 40 years,” said Reitan. “On that side of the river, prices are completely different from the New Jersey side…This pipeline will help our earnings and also provide much more environmentally friendly electricity on Manhattan.”

Because of lower gas prices in the United States, Statoil plans to cut its production. “We will reduce the rig count in the U.S., responding to the low U.S. gas prices,” Reitan said. “The beauty of that asset is the ability to react to prices to create more value, so growth in the U.S. will be slower next year. And the impact may be in the order of 25,000 boe/d compared to plan.”

Statoil is “earning money in the current price environment” in the Marcellus Shale “but we would like to earn more…So we think these volumes are better produced later,” said the CFO. “We will, of course, monitor the situation in the markets closely and also, the way we look at it, and so on. But you should expect us to apply that strategy in the current price environment.”

There will be some growth in the Marcellus in 2013, Reitan said. “But it is, I would say, limited…When it comes to Marcellus…there are some 230 wells that we have drilled that are waiting for gathering systems and need to be completed and so on. So it’s quite an inventory of wells.”

He was asked if Statoil was interested in gaining a stake in any of the North American liquefied natural gas export projects.

“I guess a big discussion over there to do such an investment, you actually have to be a strong believer as well. You need to believe in some $4.00 spreads between the U.S. market and other markets, and you need to believe in that for some 20 or 30 years to justify that investment..We think about a lot of things in our company and sort of that is also part of what we think about from time to time. But there are no firm plans in any direction in our search.”