Royal Dutch Shell plc on Thursday announced two more agreements in a bid to restructure its North American portfolio and realign its shale operations with the divestiture of 126,000 net acres in North Louisiana’s Haynesville Shale and the Pinedale Anticline of Wyoming. 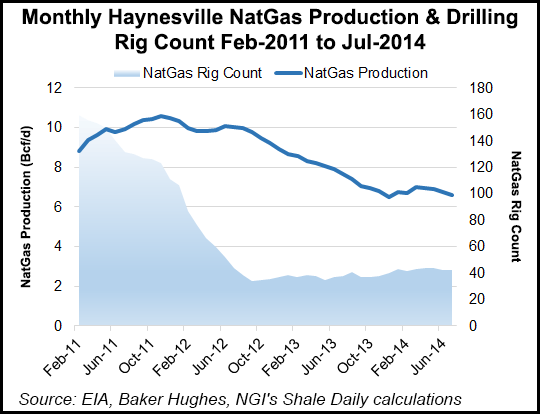 Houston-based Ultra Petroleum Corp. agreed to exchange 155,000 net acres in the Marcellus Shale and make a cash payment of $925 million for 19,000 net acres in the Pinedale. Wells Fargo Securities analyst David Tameron said the company was a natural fit for the Wyoming transaction, where Ultra is in the early stages of developing a dominant position (see Shale Daily, Aug. 4). Ultra said the transaction will find it operating 1,577 gross wells, or controlling roughly 68% of the field.

Shell has been thinking along the same lines and has said on several occasions that it will minimize its exposure to dry natural gas and ditch other underperforming North American onshore assets that have led to a series of write-offs in recent quarters (see Daily GPI, Aug.4; March 13). Even still, the major will receive more acreage in the Appalachian Basin in its deal with Ultra, acquiring 100 MMcfe/d of Marcellus production, primarily in Tioga and Potter counties in north-central Pennsylvania, an area that is also prospective for the Utica Shale.

“We continue to restructure and focus our North America shale oil and gas portfolio to deliver the most value in the longer term,” said Shell Upstream Americas Director Marvin Odum. “With this announcement, we are adding highly attractive exploration acreage, where we have impressive well results in the Utica, and divesting our more mature Pinedale and Haynesville dry gas positions.”

In a separate deal, Shell agreed to sell its interest in 107,000 net acres in the Haynesville to Vine Oil & Gas LP for $1.2 billion in cash. With the transaction, Shell will exit the play and turn over its 250 MMcf/d share of production to Vine, a partnership formed by Blackstone Energy Partners and funds affiliated with the private equity group Blackstone.

“We are pleased to acquire and develop a significant, strategic and top-tier position in the core of the Haynesville Shale, a premier North American unconventional dry gas play located next to multiple growing sources of demand and an area where we have operated extensively before,” said Vine CEO Eric Marsh.

Shell’s agreement with Ultra is expected to close this quarter, while the Vine transaction is to close in the fourth quarter. Both transactions come just two days after Shell announced the sale of 207,000 net acres in eight counties, spanning Ohio and Pennsylvania, to Rex Energy Corp. for $120 million in cash (see Shale Daily, Aug. 13).

Shell’s Pinedale assets give Ultra another 1,108 gross wells, along with associated facilities and a 0.7% overriding royalty interest in another 11,500 acres. Shell will also assume 100% interest in the Marcellus and Utica acreage, where it had a joint venture with Ultra in the Tioga area.

The Haynesville transaction includes 418 producing wells, of which 193 were operated by Shell.