A spike in oil and natural gas prices should lead to a sharp increase in first quarter results for Shell plc, but its exit from Russia is likely to be a one-time $4-5 billion writedown, the London-based major said Thursday. 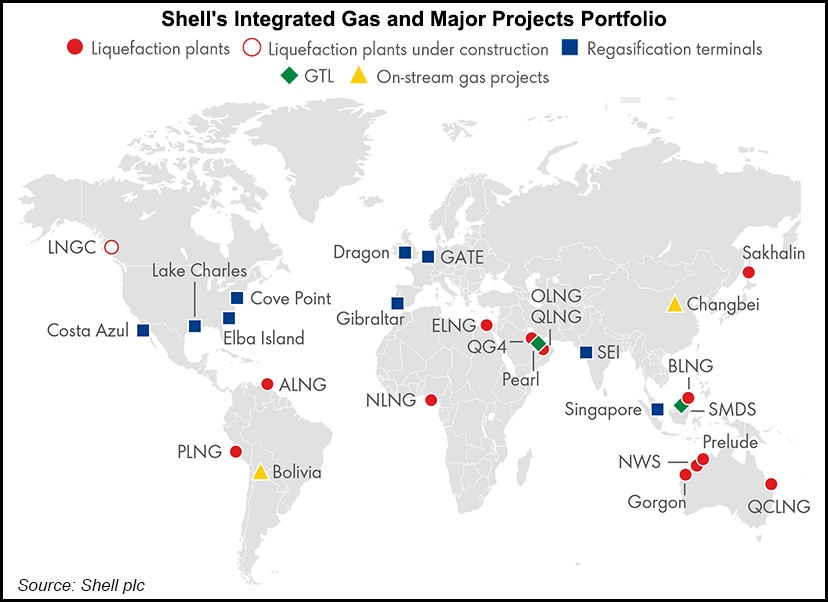 “Trading and optimization results for Integrated Gas, including Renewables and Energy Solutions, are expected to be higher compared to the fourth quarter 2021,” Shell stated.

“The prevailing volatility in commodity prices has led to larger ranges in the financial guidance for the quarter,” Shell noted in its update. Cash flow for the first quarter is expected to be negatively impacted by “very significant” outflows of around $7 billion resulting from changes in the value of oil and gas inventories.

In the Integrated Gas segment, Shell pegged 1Q2022 production of 860,000-910,000 boe/d. The production was “driven by maintenance activities, including the planned turnaround of one of the trains” at the Pearl gas-to-liquids complex in Qatar, it noted. “The outlook includes 50,000 boe/d for the Canadian Shales assets.”

Exiting Russia is leading to substantial one-time losses, however, and are forecast to be more than Shell had signaled last month. In early March, Shell joined its energy major peers in announcing it would end new investments in Russia following the invasion of Ukraine.

Shell at that time ceased all spot purchases of Russian crude oil. It also shuttered its service stations, aviation fuels and lubricant operations in the country.

In addition, Shell is exiting joint ventures with Russia’s state-controlled Gazprom, the energy giant behind the Nord Stream 2 natural gas pipeline and related entities. Shell also is divesting the 27.5% stake in the Russian Sakhalin-II LNG facility and its 50% stake in the Salym Petroleum Development and the Gydan energy venture.

The post-tax impact from the one-time charges, along with other writedowns that include “onerous contracts,” are likely to reach as high as $5 billion. Shell’s initial estimate was about $3.4 billion.

In addition, Shell said the benchmark weighting for Russian Urals crude has been reduced to 7.5% from 13% following a decision to stop buying Russian crude on the spot market.

“Shell has not renewed longer-term contracts for Russian oil, and will only do so under explicit government direction,” executives said. However, “we are legally obliged to take delivery of crude bought under contracts that were signed before the invasion.

“The current volatile state of oil markets and the ongoing efforts to reduce term volumes of Russian sourced feedstock, may mean this formula will be updated on a quarterly basis in 2022.”

Shell is scheduled to issue its quarterly results on May 5.