The 2013 Atlantic Hurricane season is deep into its second half and there has yet to be any significant threat to natural gas and oil interests in the Gulf of Mexico (GOM). But with the flood of onshore natural gas that has come out of U.S. shale plays in recent years, would a hurricane in the GOM have the same impact on prices and supply as storms have in the past? 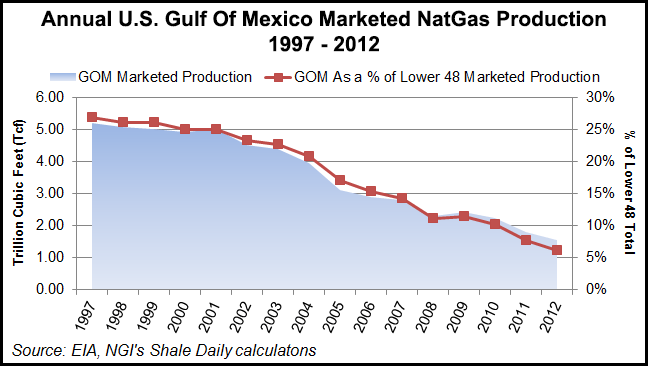 “Certainly, the human effects of a hurricane are horrible, so in that sense you can’t overplay it, but in fact it means less and less to the reliability of the United States gas supply,” said Maryland-based energy consultant Ben Schlesinger.

Hurricanes Rita and Katrina wreaked havoc on the oil and natural gas industry, onshore and in the GOM, during the 2005 season (see Daily GPI, Dec. 7, 2005). But that was an unusually active season, with a total of 26 named storms, including 14 hurricanes and seven intense hurricanes, and the oil/gas industry has changed significantly since then.

“Rita and Katrina were interesting because they gave us the first inkling of the incredible, monster supply that we have in the United States in the form of shale gas that we really didn’t understand or realize in the mid-00’s…they knocked out the Gulf, with jackup rigs torn up and ripping up pipelines; it was a mess, with something like 90% shutoffs,” Schlesinger told NGI’s Shale Daily. “The onshore hub prices went really high, but then after a day most of them came back to normal, and then by two or three days there was essentially no effect.”

According to NGI‘s Daily Gas Price Index, physical prices returned to previous levels fairly quickly at a number of hubs after Rita, but trading at the Henry Hub in South Louisiana was offline for nearly two weeks.

“We were looking at this data and thinking ‘wait a minute, how can this be? Nominations are being refused; the pipeline industry is in mayhem, and yet prices are basically not reacting,'” Schlesinger said. “And the answer, of course, is that gas came rushing from onshore fields to replace the lost offshore gas to the point that pricing was restored almost immediately.”

“We should batten the hatches because you can still have rigs coming loose,” he said. “I understand they’ve improved the anchoring from the Rita and Katrina days, so they’re more reliable, but it’s still going to happen in the worst conditions.”

In any event, the amount of natural gas in storage this year would lessen the blow from a GOM hurricane. There was 3,253 Bcf in underground storage for the week ending Sept. 6, 1.4% above the five-year average, according to the Energy Information Administration (EIA). In September 2005, traders were still monitoring GOM shut-in figures in Hurricane Katrina’s aftermath, near-month natural gas futures prices were above $11/Mcf and working gas in storage stood at 2,758 Bcf (see Daily GPI, Sept. 16, 2005).

Production from U.S. shale plays has shifted the paradigm since 2005, moving the industry from efforts to import liquefied natural gas (LNG) from overseas to a surplus situation that has regulators and the industry scrambling to build LNG export facilities (see Shale Daily, Sept. 17a; Sept. 13). The Eagle Ford and Bakken shales are stars among liquids-rich and oil plays now, but several others are poised to join or possibly eclipse them, according to a recent note by Standard & Poor’s Ratings Services (see Shale Daily, Aug. 27).

In the Marcellus, robust production is weighing on prices, causing Bank of America (BofA) analysts to doubt the staying power of their fourth quarter and 2014 price forecasts and prompting Bernstein Research to cut its 2013 forecast by 25 cents (see Shale Daily, Aug. 26). “The Marcellus is a monster and production keeps growing,” BofA said in a recent note. “North America simply remains awash with dry natural gas…”

For now, the 2013 Atlantic hurricane season poses little threat to GOM energy interests. While the consensus forecast has been for above-average tropical storm activity this year, forecasters have been moderating their pre-season predictions. In a tropical forecast issued last month, Weather Services International Chief Meteorologist Todd Crawford pointed out that 70% of all named storms and 80% of all hurricanes in the past 10 years have occurred after Aug. 15, “so the heart of the season is still on the way.”

The National Hurricane Center (NHC) on Wednesday was monitoring a broad area of low pressure centered near the west coast of the Yucatan Peninsula that was expected to mover over the Bay of Campeche and the southwestern GOM during the next few days. The system had a 70% chance of becoming a tropical cyclone by Friday. “This disturbance will likely spread heavy rains over portions of eastern Mexico and could cause life-threatening floods and mudslides over areas already impacted by torrential rains during the past several days,” NHC said. Those rains came from the ninth named storm of the season, Ingrid, which dissipated over central Mexico Tuesday.

Humberto, which had been the season’s first hurricane, was a “poorly organized” tropical storm Wednesday, located about 1,060 miles west-southwest of the Azores with maximum sustained winds of 40 mph, NHC said. Humberto was expected to turn toward the north-northeast later in the day, a track that would take it into the North Atlantic, well away from North America.