Energy producers and advocates in the Rockies region are looking south of the border for Pacific Coast market options as the outlook for a Western U.S. export facility appears increasingly unlikely. 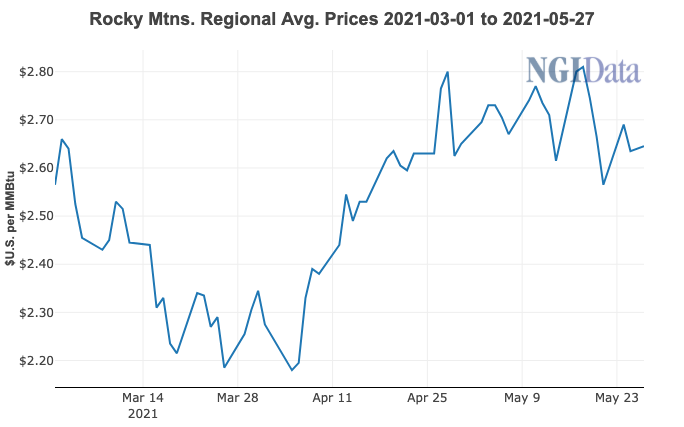 “The Energia Costa Azul plant is a prime opportunity for Rockies gas,” said Western States and Tribal Nations Natural Gas Initiative (WSTN) President Andrew Browning. The organization has a far-reaching membership that includes a handful of energy companies including Sempra, counties and regulators in Colorado, Wyoming and Utah, the Ute Indian Tribe and the State of Baja California.

The ECA project, one of multiple liquefaction terminals envisaged for Mexico’s West Coast, would allow U.S. gas exports to bypass the Panama Canal and reach Pacific demand markets faster and more cheaply. The initial phase of the project would comprise a single 3.5 million metric ton/year train, though a proposed expansion would see it grow to 10 mmty.

Feed gas is already sourced for the initial phase, according to Sempra LNG regional vice president Brian Lloyd, but the second phase would require a new pipeline from the Permian Basin or elsewhere in the West to supply ECA LNG.

He added that gas sourced from Rockies basins would add diversity to its offerings to Asian LNG buyers looking to derisk their portfolios.

“We do 20-year sales and purchase agreements…and so we know over the course of those 20 years, you’re going to see shifts in gas supply, gas demand and configuration of the pipeline network,” he said. “So one of the things we pride ourselves on is having our buyers that utilize our infrastructure having access to multiple basins.”

Vista Pacifico would have an export capacity of 3-4mmty, Lloyd said. The company has received permits from the U.S. Energy Department to export to nations with which the United States has free trade agreements (FTA), and expects to receive non-FTA approval in the coming months, he added.

“Unlike ECA Phase 2, we do believe that there’s existing pipeline capacity in the U.S. and Mexico that we think we can move additional volumes off the West Coast of North America,” he said.

ECA LNG and projects like it could throw a lifeline to natural gas production in the region, which has been on the decline for years as explorers have favored oil targets amid low gas prices, said Wes Adams, assistant director of oil and gas at Utah’s School and Institutional Trust Lands Administration.

“From Utah’s perspective, we need a catalyst,” he said. “I think what we need is to firm up an offtake agreement, and we need to represent viability to do that. So if we have a viable West Coast LNG export option, and the reserves available, that the rest will kind of fall in place. But we really do need these Asian countries to really see this opportunity to engage in a long-term offtake agreement that could support additional drilling in the Rockies.”

Browning said the main gas basins of the region — the Green River of Wyoming, the Piceance of Colorado, the Uinta of Utah and the San Juan of New Mexico and Colorado — could provide almost 11.5 Bcf/d for re-export in Mexico.

Pipeline capacity to supply the second ECA LNG phase from the Rockies basins does not yet exist, he added. His group is currently analyzing potential routes and permitting hurdles that would need to be cleared to move forward.

“There are a number of different ways, including the existing El Paso system, as well as pipelines coming out of Utah through the San Juan Basin,” he said. “So we were putting pen to paper on kind of where the best routes would be.”

Browning also floated the idea of using the states’ bonding authorities to “plug in” infrastructure gaps to move gas from the region to ECA LNG, and said he was looking into how western states may work together to provide feedstock.

“The concept of a state gas compact or a bundled approach has really not been done before as far as we know,” he said. “And so we’re looking at what that might look like, and we think it’s a good opportunity for our states to exercise that authority to develop markets for export for the gas.”

Adams agreed that more pipe might be needed to supply ECA LNG in the future, but added that many existing pipelines may have some available capacity because of declining production.

“We do have probably at least 40% additional capacity at some of the lines, and so we can ramp up pretty much immediately for this incremental LNG takeaway,” he said.

Sempra executives recently said during the company’s first quarter earnings call that it was looking at ways to “green up” its LNG sites, including deploying carbon capture and sequestration technology and providing emissions certificates to buyers.

Lloyd said CCS was unlikely to be implemented at the Baja California site, but Sempra may look into carbon conversion options in Mexico.

The company will use low-emissions gas turbines, making ECA LNG “one of the lowest-carbon LNG terminals in the world,” he added.

“We do think we ultimately can get the liquefaction process, as we continue to build out these facilities, pretty darn close to net zero.”

On the upstream side, Browning said WTSN was optimistic about efforts being made in Congress to advance blue hydrogen and CCS projects as part of infrastructure discussions.

“We’re examining where we can fit into some of those proposed pilot projects,” he said.

“And we feel that the Western states, with our ample natural gas supplies and our geology for carbon capture and sequestration will be able to provide an ideal home to many of those pilot projects that are being proposed.”

Lloyd said those efforts as well as a drive to reduce flaring in the Permian Basin make ECA LNG even more attractive to carbon-conscious buyers. “We think some of the initiatives the Western states have done may ultimately make that gas very attractive from a greenhouse gas emissions perspective,” he said. “And we think that access to U.S. producers and U.S. gas markets is going to be a bit of a differentiator for us.”