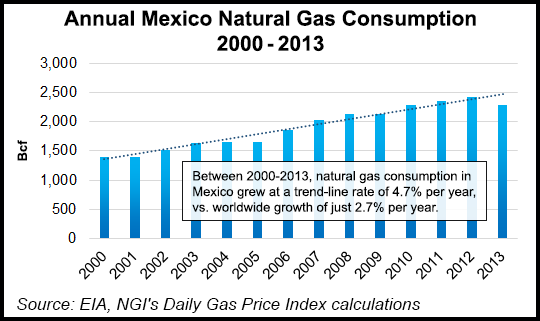 Through its Mexican subsidiary, Infraestructura Energetica Nova SAB de CV (IEnova), Sempra’s investment in Mexico will approach nearly $5 billion in value when the deal closes in the fall. IEnova has agreed to buy Pemex’s 50% equity interest in Gasoductos, in which the Sempra company will own 100% of the equity capital.

Aside from the mixture of natural gas, ethane and propane infrastructure facilities, IEnova and Pemex agreed to maintain a joint venture for the Los Ramones Norte pipeline project.

“This partnership will allow [the two] to continue building on their successful history of joint development of energy infrastructure projects in Mexico,” a Sempra spokesperson said.

Sempra President Mark Snell said the acquisition will create “incredible value” for the parent company and the Mexican subsidiary. “It expands our asset base and operating capabilities in Mexico. It provides opportunities to leverage our resources and grow in the marketplace.”

Snell said the acquired JV assets are under long-term contracts and two of the six projects — the Los Ramones I natural gas pipeline and the ethane pipeline — are still under construction and are expected to be completed later this year.

On quarterly earnings conference calls and in analysts’ meetings, Sempra’s senior executives continue to portray Mexico as a sweet spot for the company’s long-term growth and profits, concentrating on energy infrastructure and long-term contracts to underpin the investments (see Daily GPI, March 3).