Saudi Arabia, which leads the Organization of the Petroleum Exporting Countries (OPEC), may quickly ramp up production this spring, following the recent momentum in oil prices and its own expectations for increased demand in the second half of 2021. 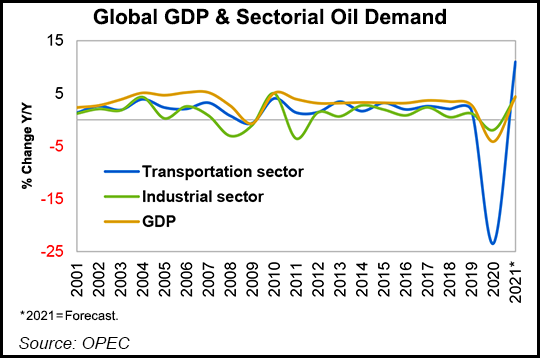 It would mark a stark shift from its current stance.

OPEC and its allies, aka OPEC-plus, this month maintained lower near-term production targets. The cartel had previously called for its members to keep supply levels steady this month, with the exception of leader Saudi Arabia. The kingdom agreed to voluntarily trim output by 1.0 million b/d in February and March to further align global supply with demand that has been under pressure from pandemic fallout.

Saudi Arabia, however, is preparing a plan to reverse course in April and could announce the shift in policy when OPEC-plus meets early next month, the Wall Street Journal reported Wednesday, citing advisers to the cartel. Oil prices reached 13-month highs in recent days.

The Saudis’ plan had not otherwise been made public or formally communicated to OPEC delegates. Saudi Arabian Energy Minister Prince Abdulaziz bin Salman, while speaking at a virtual conference on Wednesday, said it was too soon to assess with confidence the trajectory of the pandemic or to make any new announcements.

“We are in a much better place than we were a year ago, but I must warn, once again, against complacency. The uncertainty is very high, and we have to be extremely cautious,” he said. “Those who are trying to predict the next move of OPEC-plus, to those I say, don’t try to predict the unpredictable.”

Virus outbreaks during the winter months have kept travel in check and, by extension, muted demand for gasoline and jet fuel.

The cartel last week forecasted that global oil demand would rise by 5.8 million b/d to average 96.1 b/d this year. While too early to predict its own output growth, the organization estimated non-OPEC supply growth of 700,000 b/d this year to average 63.3 million b/d.

Despite near-term uncertainty, “positive developments on the economic front, supported by massive stimulus programs, are expected to encourage demand in various sectors” in the second half of 2021, OPEC researchers said.

The International Energy Agency (IEA), in its February outlook, similarly predicted strengthening demand later in the year. The agency estimated that global oil demand would rise by 5.4 million b/d in 2021 to reach 96.4 million b/d, recovering roughly 60% of the volume lost to the pandemic in 2020.

It pointed to expectations for widespread inoculations by summer and the potential for an end of the pandemic to open paths for stronger economic activity, more travel and a rebound in demand for transportation fuels.

“While oil demand is expected to fall by 1 million b/d in 1Q2021 from already low 4Q2020 levels, a more favorable economic outlook underpins stronger demand in the second half of the year,” IEA researchers said.

EIA is slated to release its next WPSR – covering last week – on Thursday. That is a day later than usual because of the Presidents’ Day holiday.