Santos Ltd. may be facing an extended delay before it can proceed with its $3.6 billion Barossa project to extend LNG exports from northern Australia after a federal court denied an appeal. 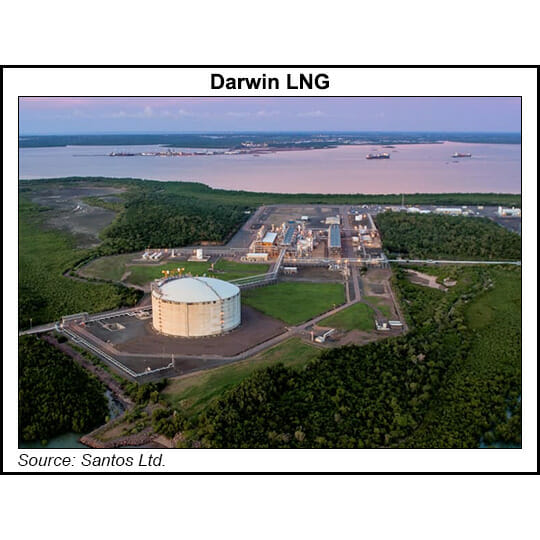 The Barossa project, sanctioned last year, is intended to provide more gas supply for the 3.7 million metric ton/year Darwin LNG terminal, possibly extending its lifespan. The terminal is fed by volumes from the Bayu-Undan field, which has been gradually declining. Santos operates Barossa as a part of a joint venture with partners Jera Co. Inc. and South Korea’s SK E&S Co. Ltd.

The federal court sided with a group of indigenous Tiwi Island residents that argued traditional owners were not properly consulted before approval was given last February.

“Santos has always sought to meet its consultation responsibilities and is continuing the process of revising the Drilling Environment Plan to address the matters contained in the judgment,” company representatives stated.

Santos plans to continue to move forward to seek approvals, as ordered by the court. It also is maintaining its timeline for first gas produced from the Barossa project by the first half of 2025.

Energy analyst Bruce Robertson at the Institute for Energy, Economics and Financial Analysis, told Australia’s ABC News that future approvals for Barossa, and other oil and gas projects, could take “more time” to achieve all the appropriate parties for consultation.

Santos was issued a court order in September requiring it to halt drilling activities in the Barossa field offshore northern Australia. In October, the firm reported it narrowed its capital expenditure guidance from a range of $1.4-1.5 billion to $1.15-1.25 billion with the expectation of continued delays for the rest of the year.