Russia’s Gazprom PJSC announced plans to halt flows of natural gas to Europe through the Nord Stream 1 (NS1) system at the end of the month as the continent closes out its most volatile market week since March. 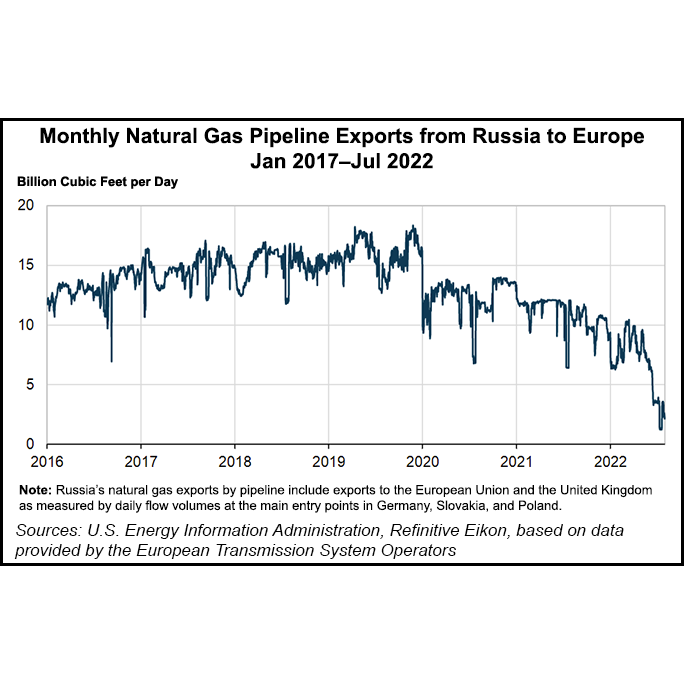 The state-controlled firm disclosed Friday flows on NS1 would be closed from Aug. 31 to Sept. 2 during scheduled maintenance on its only currently operating compressor at a key station, Portovaya CS.

Once maintenance is completed, “provided that no malfunctions are identified,” flows could resume on NS1 at around 20% of the system’s capacity, representatives for Gazprom said in a statement.

NS1 volumes have been reduced to 20% since July, which Gazprom has blamed on sanctions interrupting its scheduled maintenance operations. It previously lowered gas transmission to 40% of capacity after conflict arose over the return of a turbine engine from a Siemens AG facility in Canada.

Siemens, under an existing contract with the Russian firm, is expected to conduct the maintenance on the compressor unit, according to Gazprom. Gazprom has previously called the station, Portovaya CS, located at the Russian coast of the Baltic Sea, a “facility of critical importance.”

NS1 previously shut down for a 10-day period in July for regularly scheduled maintenance. During that time, European gas markets roiled as governments on the continent warned western flows might not return.

The news comes as European commodity markets reached heights not seen since just after Russia’s late February invasion of Ukraine. Prompt month prices for the Dutch Title Transfer Facility benchmark rose $7 through the week to close at around $72/MMBtu.

Germany’s Federal Network Agency (FNA), which regulates the gas market, reported Tuesday that total natural gas storage levels in Germany were at more than 78%. The storage level at the country’s Rehden facility, one of the largest in western Europe, was at around 58%.

Analysts with European trading firm Energi Danmark wrote TTF prompt prices had “doubled over the course of the last two months, as the market is trying to price in an expected complete end to Russian gas deliveries in the near future.”