Using what they call “groundbreaking” methods, researchers in a new paper claimed to have found up to 12% of the globe’s methane emissions are coming from massive but often overlooked releases from major oil and gas producing regions. 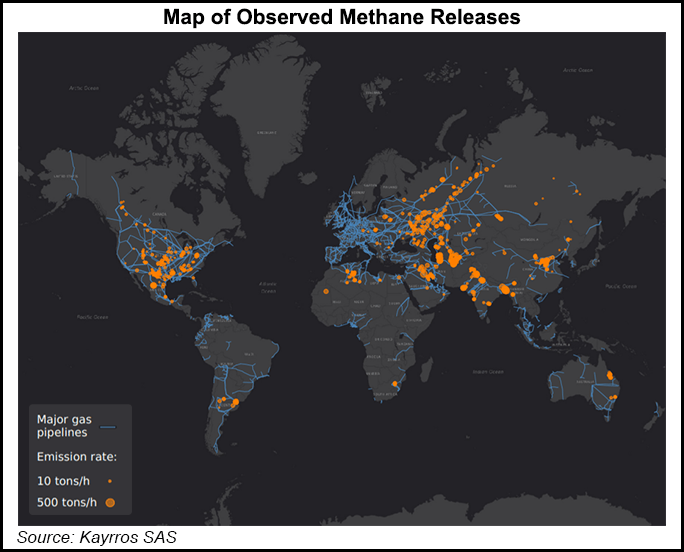 The paper, published Thursday in the peer-reviewed journal Science, used thousands of daily images from a European Space Agency satellite to help researchers study what they dubbed “ultra-emitter” events from 2019 to the end of 2020.

With data from around 1,800 documented plumes, 1,200 of which came specifically from oil and gas infrastructure, scientists said new image analysis and machine-learning techniques accurately calculated an estimated 8 million metric tons/year (mmty) of methane escaping from the fossil-fuel-rich regions during the two year span.

The study consisted of images from six of the world’s largest oil and gas producing countries collected by France-based data firm Kayrros SAS and analysis from a consortium of French and American scientists affiliated with the firm, the French Climate and Environmental Science Laboratory and three U.S. universities.

Kayrros Scientific Director Alexandre d’Aspremont said the unique approach to observing structures like gas pipelines and production wells provided new insight into the gaps created by relying on detection from the ground.

Oil and Gas Fields vs. Pipelines

These new observations also gave researchers some key details about the frequency and characteristics of methane releases from oil and gas fields and pipelines, and how they differ.

When the satellite captured plumes of methane extending into the Earth’s atmosphere, scientists would use available data from the image to measure its “release duration,” finding that plumes from production fields usually lasted much longer.

They would also often be able to identify leaks from pipelines by a tell-tale “double plume” appearing as twin methane releases from both ends of a pipeline section. These releases typically ended sooner than those from fields, the researchers told NGI.

The data also revealed differences in methane releases by region, with the United States and Russia appearing to have more releases near pipelines that tended to crop up “intermittently.”

“By comparison, in Turkmenistan, Iran and Algeria the plumes are mostly located in production areas instead and we find a greater percentage of persistent sources,” authors of the paper told NGI.

The U.S. onshore oil and gas sector is the largest industrial source of domestic methane emissions, according to the Environmental Protection Agency (EPA), making up about 30% of the country’s methane pollution.

The Department of Transportation’s Pipeline and Hazardous Materials Safety Administration (PHMSA) has also warned methane is 30 times more impactful in warming the Earth than carbon dioxide.

U.S. regulators and politicians have been increasingly focusing on the country’s contributions to global methane levels, with the Environmental Protection Agency (EPA) announcing in November a proposed set of regulations to curb methane emissions from new and existing sources in the oil and gas industry.

The proposal would reduce methane emissions by about 41 million tons through 2035, equal to all of the carbon dioxide (CO2) emitted from U.S. passenger cars and commercial aircraft combined, according to EPA.

These moves help back up goals set by President Biden’s administration, which announced in September that the United States would be joining a pledge with the European Union to reduce methane emission by 30% of 2005 level by the beginning of the next decade.

Exclusion of the Permian

One of Lauvaux’s major takeaways from the paper is a belief that greater use of atmospheric observation in the future will be essential to make sure countries like the United States are accurately tracking progress toward those goals, but researchers also identified some flaws.

The study included data releases tracked across North America’s network of pipelines and in some of its key onshore basins, including in the United States, but notably excluded review of the Permian stretching between western Texas and eastern New Mexico.

The authors of the study explained that operations in the basin weren’t “suited for the analysis developed in the paper,” because the methods used focused on plumes that could be tracked to single source “ultra-emitters.” The methane emissions observed over the Permian would be overlapping in the images and appear as “clusters of smaller leaks.”

Researchers told NGI that images from the Permian typically showed a large “cloud of methane” across most of the region. While other shale basins did have plumes that would sometimes have similar-looking origin points, researchers were able to accurately use their methodology.

The research didn’t just stop at observing and calculating methane emissions. Scientists also explored methods for reducing the massive volumes of gas from escaping into the atmosphere and the impacts those investments would have on both pollution and the bottomline of hydrocarbon producers.

The research team’s overall conclusion was that ultra emitters could actually be addressed at relatively “low costs” while saving countries that produce most of the world’s hydrocarbons billions of dollars when considering the climate and health costs of air pollution.

According to a cost analysis by Drew Shindell, professor of climate sciences at Duke University’s Nicholas School of the Environment, U.S. companies could save between $50 to $100 per Mt of methane prevented from entering the atmosphere.

The research echoes comments by the EPA from November, when the agency said regulations on methane from the country’s oil and gas industry significantly reduce the country’s contribution to climate change for “pennies per bbl of oil or Mcf of gas.”